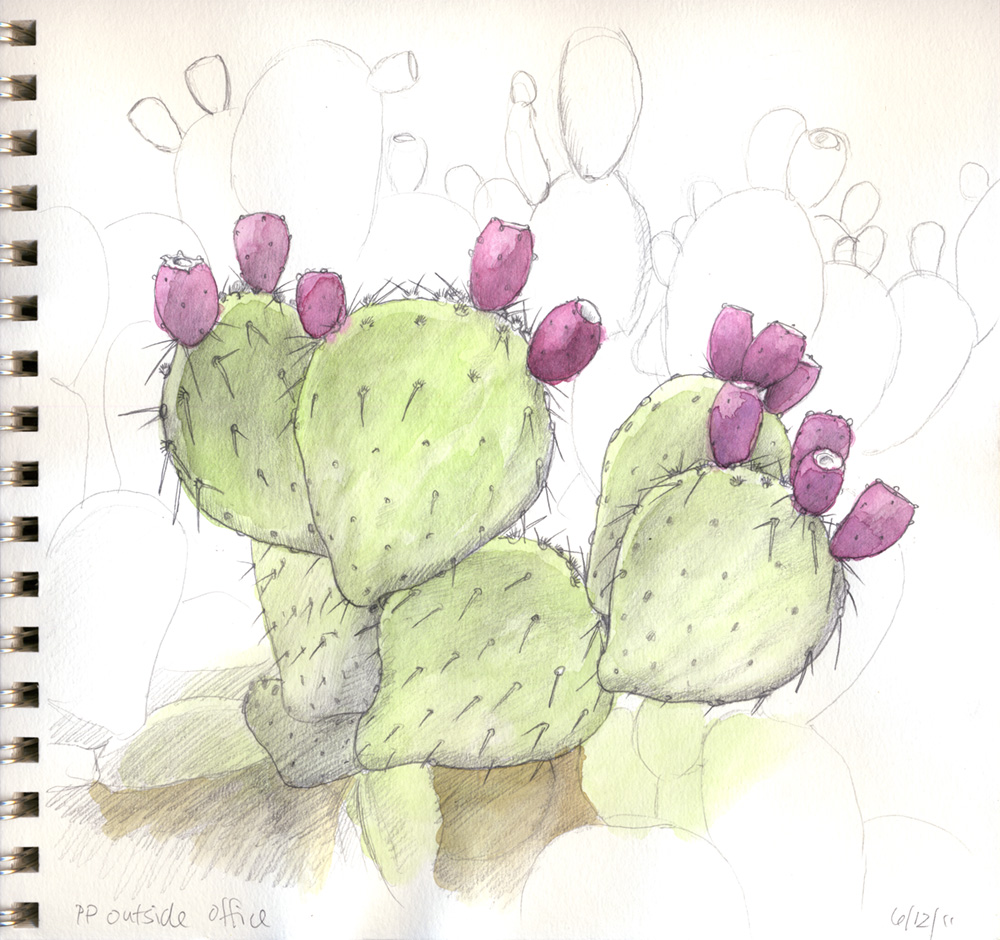 Nature log. It’s no wonder that in the traditional Tohono O’odham (Papago) calendar, the new year corresponds to the saguaro wine feast, the most important ceremony of the year, celebrating the coming of the rains, maybe even helping them come. The forming of the huge cumulonimbus clouds, the thunder and lightning, the driving rain following strong winds that may gust to 80 mph? this is the most exciting time of year, and the most necessary for life to continue in the desert.

In my 30 years living in Tucson, spring has always been an important time because of the delicately balanced annual flower blooms. You never know how good a blooming year it will be until it happens. It held a lot of anticipation, like a sport or a treasure hunt.

But now that I’ve spent a monsoon season on the Hill, I realize that, in the desert, this is the real time of renewal and new life. It’s dramatic too. It’s the time to party. Everything looks its best. Plants that appeared dead or on their last gasp before the monsoons, start to put out bright green luscious leaves. It’s almost overnight. Everything that is not truly dead looks perfect, bright, and clean, like a new car just out of the show room.

I can’t keep up with all the things to draw. I take a lot of photos for later.

There are three traditional phases to this most sacred time of year in the local oral tradition, thousands of years old. It’s meaning is generated not by the cycle of the sun as in Europe, nor by abstract philosophizing, but by the the most concrete of experiences?the weather.

When Father Eubesio Kino visited the O’odham village of “Cucshon” or “At the Black Base of the Mountain” local people were harvesting saguaro fruit on Sentinal Peak/Tumamoc Hill above their village. These mountains in fact created a major oasis here where the volcanic rock caused groundwater to come to the surface. Partly for this reason, Tucson is one of the oldest continuosly inhabited places in North America. Villages have been on Tumamoc at least 2400 years ago, and evidence of human presence can go back at least 5000 years. Ceremonies involving saguaro fruit harvest probably go back as far as this. It’s a matter of survival.

Much of this tradition is lost, only fragments have been recorded by anthropologists. But this knowledge of the relationship between columnar cacti, the rains, and humans is part of the landscape?as much as the cacti, scenic views, or the sky.

This is how I understand it:

It begins after San Juan’s Day, June 24 on the Catholic calendar, a few days after the summer solstice. Tradition holds that the monsoon can come any time after the feast of St. John the Baptist. I don’t know if it is pure coincidence that the feast happens at this time, but the Sonoran Desert region is indeed baptized many time over during this season.

From an ecological point of view, the saguaro cactus seeds need to ripen just before the rains because this violent dousing is one of the requirements for germination. Not the only one. Saguaro seeds may lie on the ground for three years before finding just the right combination of soil texture, high heat, water, and protection from the sun.

Saguaros began to bloom on Tumamoc mid May, starting on the lower elevations. They ripen over the next two months and cactus picking can begin well before the rains. So the sequence is cactus picking, summer rains, then saguaro wine feasts.

Here is a quote from the traditional rain poetry that I love to read this time of year. This is only an excerpt from long speeches? memorized and spoken this time of year by specially trained “mockingbird speakers.” It is a pleasure just to type it.

Ready, then far off something moved

at the end of the earth

the wind understood and ran.

trash it blew and piles at their feet,

it continued and arrived in the west.

Homeward it turned and looked.

The lying earth was clean and finished.

On top of that came out the white-bottomed cloud.

To the top of the sky it bumped and stood

with many round ends it stood.

With many dust storms

it started to go.

From within the wet mountains

more clouds came and joined it

plucking out white feathers from their breasts

coughing out white from their breasts.

The earth seemed so far to its edge.

But they went clear to the edge and beyond

And the little washes thought of themselves

that so many of them lay side by side

they can carry off anything

But the flood could not be stopped

at their mouths the driftwood

Thus the storm did and was completed.

Homeward it turned and looked.

The lying earth was beautifully wet and finished.

Singing for Power: the song magic of the Papago Indians of Southern Arizona, Ruth Murray Underhill. University of California Press, 1938, republished in paperback in 1976