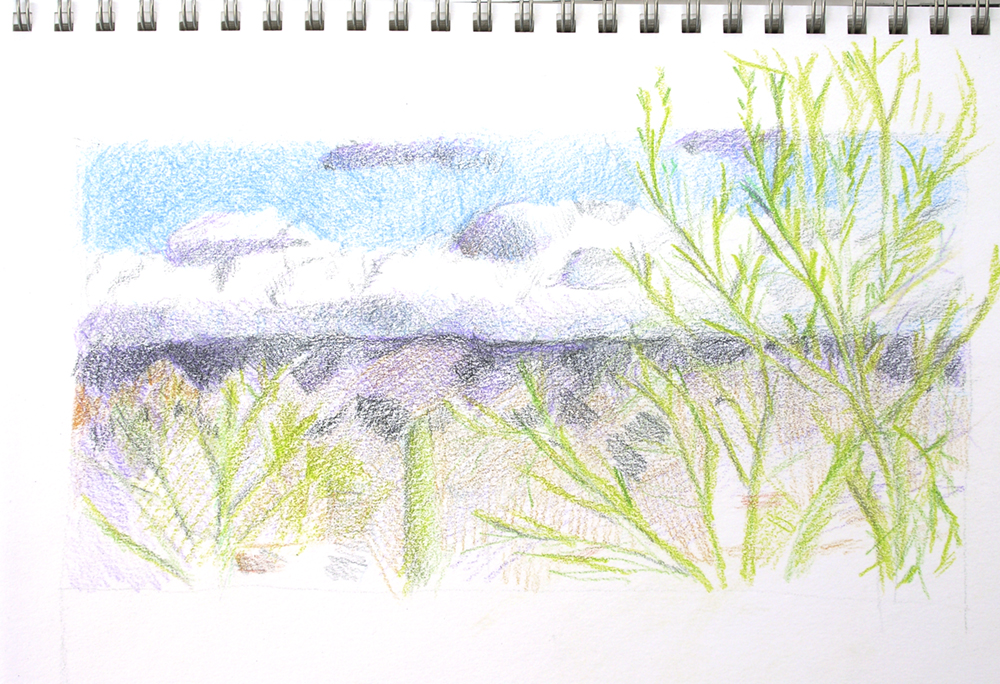 To tell the truth, there is enough here for several men to work on at once and for some time to come. To choose wisely from the abundance is the main difficulty.

? William Cannon, in a 1904 letter to Daniel MacDougal, first director of the Carnegie Desert Botanical Laboratory on Tumamoc Hill

Several of the artists who have been up on the Hill to draw have expressed feelings similar to William Cannon’s. Except that some of them would include “and women” in his sentence. Something about the desert landscape around the old Desert Lab still seems to stimulate the mind.

I would testify on behalf of this this fact: I get more new ideas when I’m up on the Hill than when I am down in the valley. I can’t explain it.

William Cannon was the first scientist, a botanist, to be hired at the new Carnegie Desert Botanical Laboratory formed in 1903, and wrote that letter to report to his boss on his first year of work on Tumamoc Hill.

He probably didn’t realize what an understatement he had made. The Desert Laboratory eventually created a huge body of very original work, involving over 60 scientists, during it’s 37 year life under the Carnegie Foundation. After 108 years, there is still lots of science to do here. As well as a lot of art, as we are finding out. I feel a certain kinship with those early scientists because the sense of enthusiasm is the same.

The first scientists working on Tumamoc Hill were from the east coast and had done their previous botanical work in temperate or tropical climates. Two simple decisions, made by Desert Lab founders at the beginning, were to have? a lasting effect on everything that followed. The first was to fence in the entire 860 acres of the Tumamoc site. That protected it from outside influences, allowing it to keep its natural integrity, to go it’s own way uninterrupted by humans and livestock. So it remained wild, as it is to this day, even as it became an island as the city grew around it.

The second decision was to build the lab right in the middle of their wilderness study area, rather than going out to work and bringing their data and samples back to a comfortable lab in town. This proved to be a brilliant move which affected how they approached their work. They dug right in.

The lab was founded to answer the question, “How do desert plants live with so little water?” Yet researchers found that desert plants, though living on the theoretical edge of survival, seemed to thrive and were doing just fine where they were, and? would die in a wetter, cooler, more predictable environment. The desert around the lab offered a chance to explore the fundamentals of life, to ask questions that would not have occurred to them in a more “normal” place.

These first researchers were inspired by the desert. The questions and ideas kept coming. It became a burst of creativity that was noticed around the world. These newcomers were pleasantly stunned and inspired by the opportunities given them by an exotic desert environment? just outside their office door. The visiting researchers actually lived in tents at first. Many became hardened explorers and adventurers, making long expeditions from their Tumamoc base.

During the Lab’s second life with the University of Arizona, scientists continued carrying on some of those same original trains of thought as well as creating new studies that continue on Tumamoc today.? It was like a first and second renaissance. And this work has included many women as well as men.

To me, drawing on site is a kind of meditation and requires sustained, but relaxed focus. It’s work, but different from the illustration I do for a living. Tumamoc hill is such a rich place that it is a huge challenge to avoid multi-tasking and focus on one thing at a time. The problem is often to just choose a subject for that morning and stick with it. The more you look, the more you notice. That includes new subjects of interest. I’m up on the hill every day and I have a huge backlog of images I want to start.

My 1.5 year-old Leo was there too, so I didn’t? get much sketching done. I don’t know, but this might be a historic first diaper changed in he Desert Lab.

One thought on “Drawing from Life”