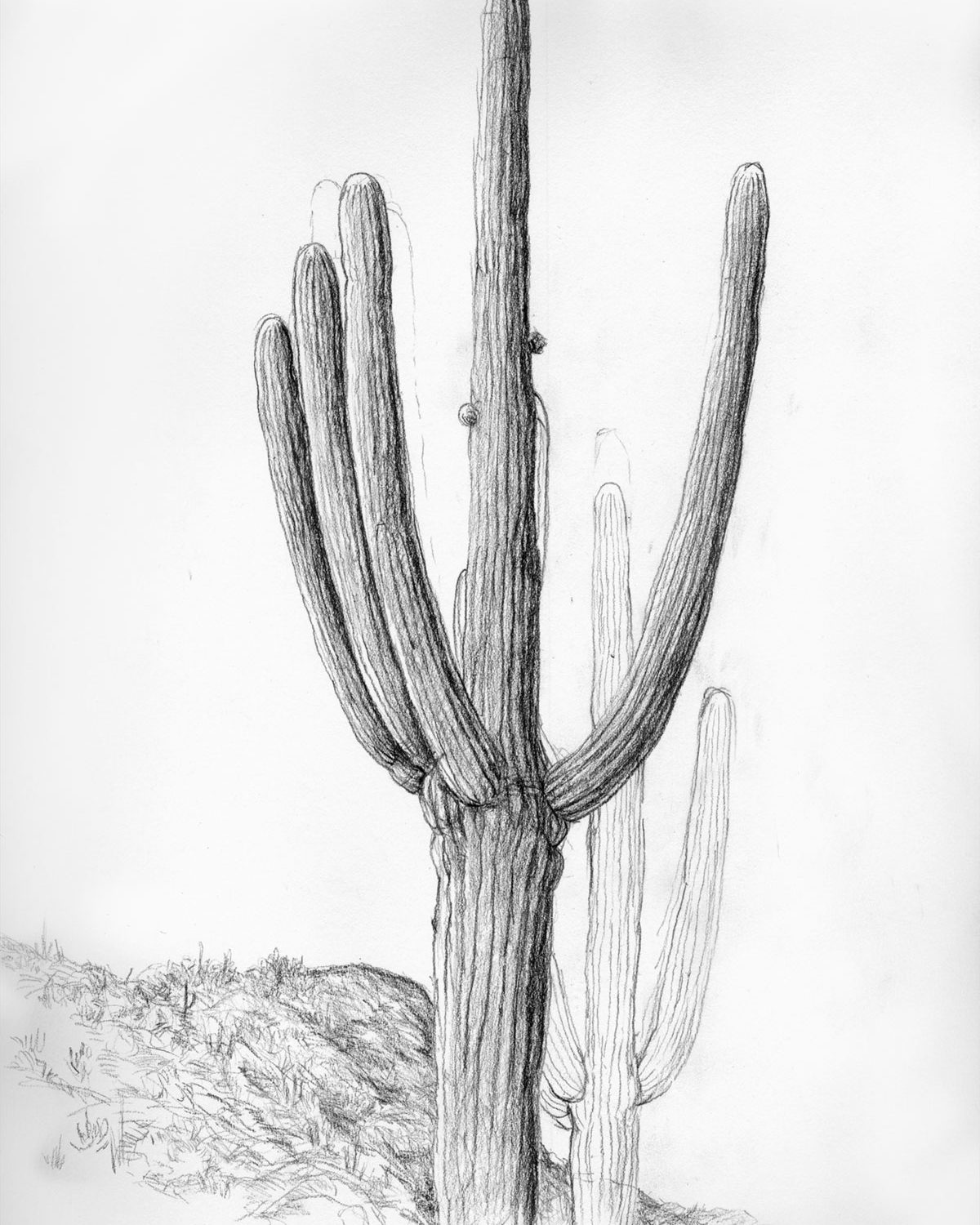 We need to honor more than we do, the man [sic] who knows how to see living things without complicated apparatus.

Tumamoc must be one of the most scrutinized places on Earth. No one knows how long prehistoric cultures have been studying the Hill, but they lived, gathered food on the slopes, and probably held ceremonies on the summit.

We do know that in 1903 The Carnegie Foundation built the Desert Botanical Laboratory buildings right in the middle of that wild? landscape, and they did most of their studies right there, just outside their doorstep. The plant study plots Volney Spalding staked out on the Hill are still the oldest continuously monitored study sites in the world. Spalding also mapped every saguaro on the hill, over 10,000, a task of almost mythological and heroic proportions.

Like a group of Sherlock Holmes’ understudies, scientists fanned out over the Hill, looking in the most subtle clues for answers to questions like: What makes the landscape look like it does? Why do the plants arrange themselves in communities like they do? How do all the elements it all relate to each other?? How do desert plants live and thrive in an environment that would wilt normal plants in an hour? In this way the new field of ecology was born.

Biologists started looking at whole landscapes. The landscapes gave a lot back. Forrest Shreve, once director of the Desert Laboratory, wrote that he wanted to see “the whole pattern and design of desert life.”

Most of the botany done up until the turn of the century had been based on classifying plants, naming and renaming them from dried collections. Although they are valuable records, herbarium specimens are dead plants. In contrast, the kind of “boots on the ground” science done by these early ecologists was leading edge at the time.

The whole hill itself was Shreve’s working laboratory, not just rooms full of glassware inside. From that home base, Shreve and his associates traveled all over the Southwest: to the tip of Baja, into southern Sonora, west into the Mojave, north into the great basin, and east into the Chihuahuan desert, to see what was out there. Desert Lab scientists even went to the Sahara and South Africa to compare those desert landscapes to the American west.

Their work continues to stand the test of time. Most of what we know about deserts comes from work done here at the Desert Lab, or is a continuation of that work.

In Saturday’s sketching session, we talked about the kinship between artists and scientists. Neither is usually aware of what the other is doing, but their is a persistent connection, based on a mutual desire to see things for what they are.

The original Desert Lab had it’s fruitful time, and was closed in 1940. The naturalist-oriented science done on the Hill was no longer a hot item for funding agencies. The Carnegie Foundation put their money into high technology like telescopes and particle accelerators. The most fund-able science would be done in large, tightly controlled, interior laboratory conditions with expensive equipment. Nothing wrong with that. People were working on the incredibly puzzling chemistry of photosynthesis, although early work on that actually was started at the Desert Lab, investigating prickly pear.

The Desert Lab had a second life when the UA bought it on 1956. As the Geochonology Lab it again teamed with enthusiastic and brilliant scientists who used it as a base to explore the landscape around it. Some called it the “Mecca”, or the “Jerusalem” of desert studies, or “Tucson’s Acropolis”, and it has become a symbol. Ecologists continue? mining the old Spalding and Shreve study plots; they are still measuring the saguaros, now with lasers. The data is as good as gold for learning about long-tern patterns of change in the environment.

A few years ago most of the Tumamoc scientists moved back down into town. The scientist who was in what is now my office told me he found a rattlesnake in here one morning and decided right then and there, “That’s it. I’m moving.”? Now, partially abandoned, Tumamoc Hill must start a new chapter in its 20 million-year-old life. Humans are still part of that.

The funding is gone, but not the thrill. The artists attracted to the Hill are finding new meaning in this place. Some of us are rediscovering things well known to the previous researchers working here. I’m sure we’re reinventing many wheels, but that’s ok. It may be a just a small thing, but by drawing outdoors here, humans can continue searching out the layers of meaning in a place. The hill is still rich and has lots to teach humans if they will pay attention. You could say it contains a kind of wisdom that can’t be contained within concepts. And now it’s not just scientists who are listening.

We as a culture need to find these new meanings for the Hill. They will define the cultural values that we will need to meet the challenge of those pioneering botanists like Spalding a century ago. He fenced the place off to protect it from domestic animals, to allow it to return to a natural state so he could watch and follow what happened next. In time it became a valuable preserve, handed it down to us. What will we do with it?

Will our current civilization find the reasons to protect a wild island in the city like Tumamoc Hill for the next 100 years?

One thought on “Art and Science”