A few of us went up to Tumamoc to view the annular solar eclipse yesterday evening, Sunday, May 20. This eclipse was called “annular” because the moon was at its farthest point in its Earth orbit, therefore it did not completely cover the sun?there was a ring of fire, the outer edge of the sun’s disk, around the eclipsing moon. Annulus means “little ring” in Latin, and we’ll just let it go at that.

I wonder if Johnny Cash had ever seen one of these. In any case, we did not get a complete ring here in Tucson, as people could see farther west where the angles were more direct. The moon swung a little off center here, but still occluding the sun at 87% at maximum coverage.

The moon took the first little bite out of the sun around 5:30pm and was at maximum eclipse at about 6:40 pm. The final phases occurred after sunset?we could see the eclipsed sun and moon going down together, eclipsed by the top ridge of the Tucson mountains. 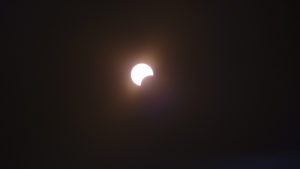 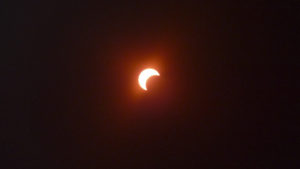 The Saguaros were loaded with flowers, more than I can remember seeing before. I could not smell them, but it’s like watermelon and bats would be coming out to visit as soon as the sun set. The air was a few degrees cooler after a hot afternoon and a half-twilight spread a soft glow over the landscape.? The eclipsing sun and moon going down together under the horizon of the Tucson Mountains, projecting their pinhole images on the walls and ground. A handful of people talked quietly, a noisy and pungent herd of javelina clicked their teeth off behind the Desert Lab buildings. The air was translucent, blending with the rocks and plants so you could almost see through the scenery to things as they really are.

I? could have chosen to view the eclipse from almost anywhere, including large telescopes open to the the public on campus, and each would have its beauty.? Tumamoc though, is where I was. It lent its own particular setting and point of view for a cosmic event. Each person watching or walking the Hill accepted the scene like a gift, without thinking about it.? Something we can take with us. An event in the outer world can seep into our mind and become part of us, a latent image like an old-fashioned photographic film that we develop within our psyche.? That’s a sense of place.