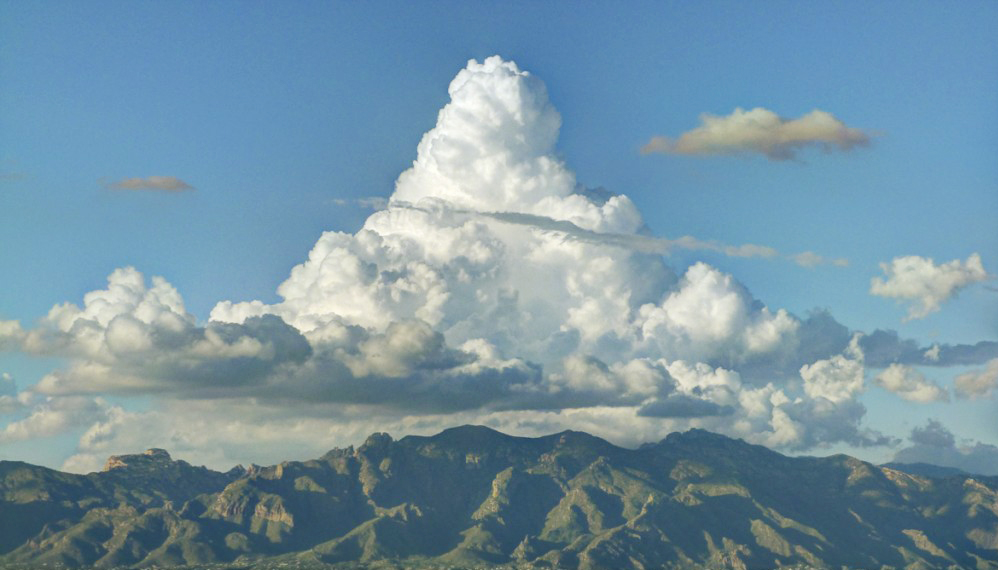 Behind you I looked.
I saw that for the heads of your mountains
the mist made circlets.
Beneath them the earth lay green with moisture.
It pleased me.

?From a Tohono O?odham invitation to the saguaro feast, translated by Ruth Underhill.

Anthropologist Lucien Levy-Bruhl wrote in 1910 that modern humans had exactly the same brain as prehistoric people, but not the same mind. So-called ?primitive? thinking participates in the outer world, rather than just watching from a neutral distance as we do. There is a fluid barrier between inner mental or emotional states and the outer world of solid objects. A person in this cultural mind-set may find their intimate thoughts expressed in nature, or objects out there becoming thoughts. Although his concept, called the ?participation mystique? was fiercely criticized by other anthropologists at the time, Carl Jung later incorporated Levy-Bruhl?s term into his theory of psychological projection.

As Jung describes it, a person (or a whole group) can put themselves under a spell where they see the unconscious contents of their own minds as objectively real in other people. A common example often cited is the love fantasies of a young man, projected upon a woman he knows nothing about.

Historian of religion Mircea Eliade, saw the loss of this older kind of participatory thinking as a recent development. Remnants of it can be easily found in modern Western technological societies, although not recognized as such. For instance: the idea of a “sacred place.” Even non-religious people who pride themselves on their freedom from “magical thinking” ascribe special significance to places, maybe the corner where they received their first kiss, or the house they were born in, or the bed where George Washington slept once. One of a Saint’s fingernail clippings, or a shirt once worn by Jerry Seinfeld could become a numinous or at least a valuable object on eBay. It’s all in the mind. Or is it in the object? I’ve been thinking about things like this since college, uh, many years ago.

Of course, this kind of identification with an object is crucial to the creation of poetry and art. A painting is just a physical object, yet is still thought to contain the thoughts and feelings of the painter, though long dead. A painting or sculpture may also hold emotion like a sacred object. Such an object hold a place somewhere between our interior mind and the external objective world.

In a more physical way, we identify with objects we own or use, like our cars. Sandra and Matthew Blakeslee describe how the brain extends our sense of self out beyond our skin and into tools, vehicles, clothing, etc, by creating spacial maps just as it does with our own limbs. We know within an inch where our fender is in relation to another car when we parallel park. If someone touches our car, it’s like touching us. The baseball bat is mapped as an extended arm.

A poem may represent a deeper connection than just? simile or metaphor. One of my favorite cultural expressions of this is by Yaqui poet, Refugio Savala, talking about Deer Songs.

Standing on the summit at Tumamoc during the summer, one can almost blend with the thoughts of the largely unknown people who lived here on the summit a thousand or two thousand years ago. Why did they live up here, so far from natural water, if not to have a better view of the sky? From that vantage point, the whole horizon is visible for 360 degrees. All of it undulating with mountains and hills. Clouds would be forming over the higher peaks, growing larger as the day progresses. A strong wind blows over you, and also blows the clouds.

Anyone who lives around mountains and looks at the sky will notice that that clouds tend to form over the highest peaks, especially people who live mostly outside. But this has a special significance during the early summer in the arid areas of North America down the Sierra Madre into the central valley of Mexico. The first humans in this land would not just have noticed the formation of these clouds, they would have studied it in intricate detail. It is magical.

After brewing all day, the storms typically move out from the mountains and rain on the valley, on our fields if we are farmers, or just on us, soaking everything that has survived the drought, or curled up to escape it, making it come alive. This joy of cloud-watching is expressed beautifully in ancient O?odham oral traditions and songs. It?s an auspicious sign to see those gathering clouds, especially after going through April, May, and June, or longer,? at afternoon temperatures over 100?F without a drop of rain. Water is the meaning of life here. It’s what men think about every seven seconds or so.

At that time of year, I often ig out Singing for Power and Rainhouse and Ocean, by Ruth Underhill and read through the formal lectures in poetic form of what is happening up there among the clouds. I type some lines out, just for the pleasure of the rhythm and feeling behind the words. They are song-poems about the weather, but they could just as well be love songs. This is from the traditional oratory spoken during the rain making ceremony: the drinking of the saguaro wine.2

On top of that came out the white

To the top of the sky it bumped and

stood, with many round ends it stood

With many dust storms, with many

lightnings, with many thunders, with

many clouds, with many rainbows,

It started to go.

From within wet mountains, more

clouds came out and joined it

Plucking out white from

their breasts, coughing out white

…
The earth, lying there, was beautifully wet and finished.

On top of that came out something seeded,

thick was its root, thick was Its stalk,

wide was its leaf, good were its silks,

good was its tassel, well did it ripen.

Therewith were delightful the evenings,

It was this that was our last wish

As you will see.

The words are in the past tense, describing the great monsoon storms in detail as if they already happened, yet they refer to the future and what will surely be the result of the people sitting together by the rain house, listening to the words of the singer, drinking the saguaro wine.

It?s not ordinary conversation. These are powerful words. They may even affect the weather.

The Body Has a Mind of Its Own: How Body Maps in Your Brain Help You Do (Almost) Everything Better, by Sandra Blakeslee and Matthew Blakeslee, Random House (2008)

Autobiography of a Yaqui Poet, by Refugio Savala, University of Arizona Press (1980)

Singing for Power : The Song Magic of the Papago Indians of Southern Arizona, by Ruth Murray Underhill, University of California Press (1976)