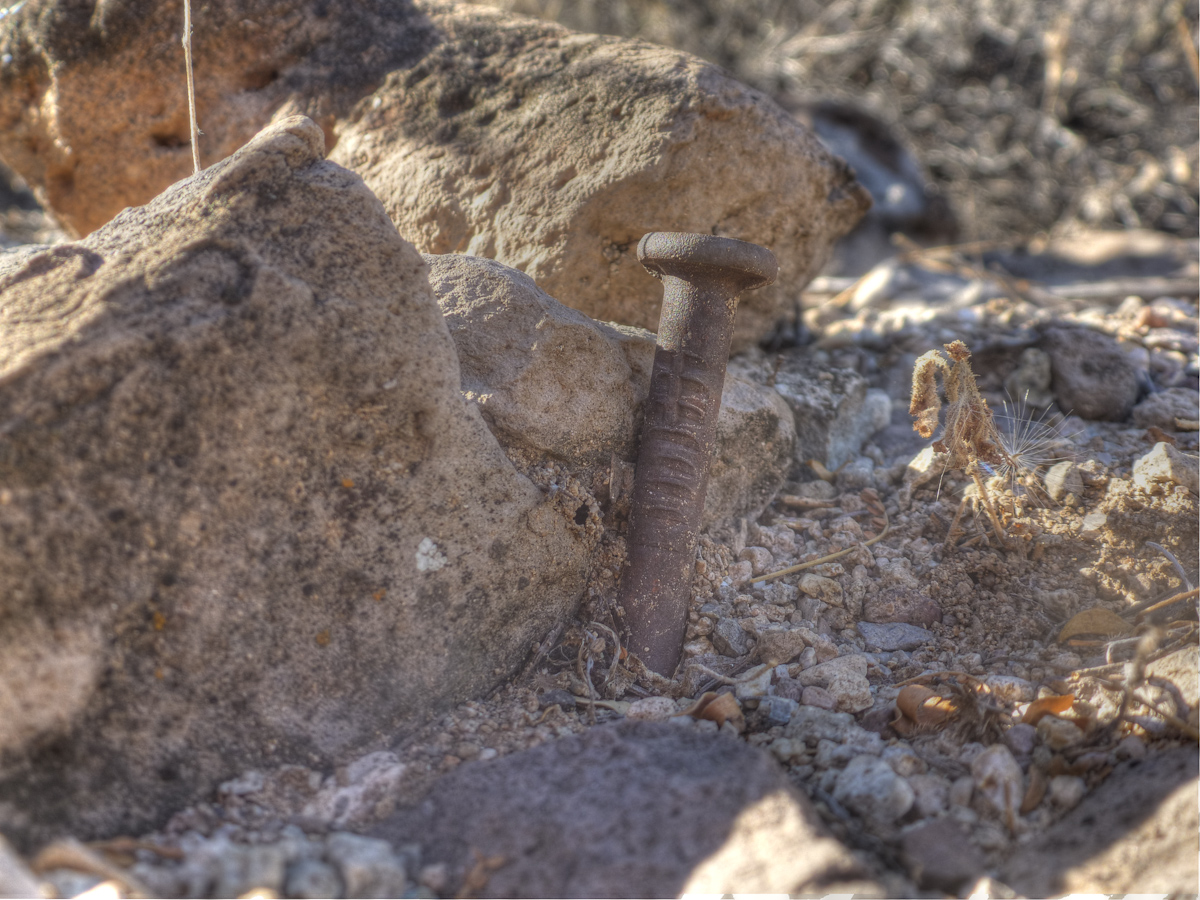 Last Saturday morning a few artists went exploring off-road into unknown Tumamoc territory. With Desert Lab scientist Ray Turner, we were looking for Spalding Plot Number Nine. As it turned out, we didn’t go very far off the road, which actually cuts off part of teh plot. The location of plot nine was lost soon after Desert Laboratory botanist Volney Spalding first set it up and mapped it along with 18 other long-term ecological study plots in 1906. Without realizing it, the crew who paved the current? Tumamoc road, in the 1940s or 50s, cut off part of the western portion of the plot, hence the border with the road. It is duly recorded as part of the long-term change in plot nine.

Spalding’s idea was to map these plots over time, recording changes in plant densities, species composition, plant life spans, and other data that could be charted numerically and compared. Individual plants would be followed throughout their mostly unknown lifespans. It was a brilliant idea at an exciting time, part of the birth of the new science of ecology. Instead of organizing dried individual plants inside in stuffy herbarium cabinets, (although this is also an exciting and worthwhile occupation) botanists began to be interested in plants as associations that adapted to specific habitats. They stepped outdoors and looked around. It was a bold move. After Spalding had a fence built around the entire Tumamoc property, about 5 miles worth to keep out grazing animals and boondocking humans, the entire landscape became an outdoor laboratory.

In an address to the Society for Plant Morphology and Physiology in 1902, Spalding said, “We need to honor more than we do the man [or woman, since his wife was also a working botanist] who knows how to see living things without complicated apparatus.”

How about a simple pad of paper and some pencils? Tumamoc eventually became one of the most scrutinized and carefully observed places on Earth. Spalding’s plots are now the oldest continuously monitored study plots in the world. That fact should catch the interest of artists, I thought.

Spalding had put his trust in future researchers, yet unborn, to carry forward his work. He had to leave Arizona in 1910 due to his advancing arthritis, and gave his maps and notes to desert ecology superhero Forrest Shreve. They are often called the Spalding-Shreve plots now. Spalding’s trust in the future was mostly well founded. Although eight of his plots are still lost, Ray Turner rediscovered number nine in 1968 and has mapped it about every decade, the more recent being last Spring.

Although I had watched that last survey, I couldn’t find the plot again. Regardless, I had to get permission to go there again. The markers are kept hard to find for a reason?no one wants stray hikers to even step within the study areas, they are that highly valued by ecologists. Forrest Shreve realized that even the scientists mapping the plots were themselves an outside intrusion, and for that reason the surveys were conducted about every 8-12 years.

Like the other Spalding plots, plot nine is a ten by ten meter quadrat. After some wandering around, we found the rebar stakes in at least two of the corners, and another outside the perimeter that we think is where the photograph is usually taken at each survey. Smaller nails were driven in at one-meter intervals along the border so a grid of string could be stretched over the whole square. That’s how Ray Turner made this drawing that I found in the Tumamoc archives, using a meter stick to estimate locations and canopy cover for each plant: 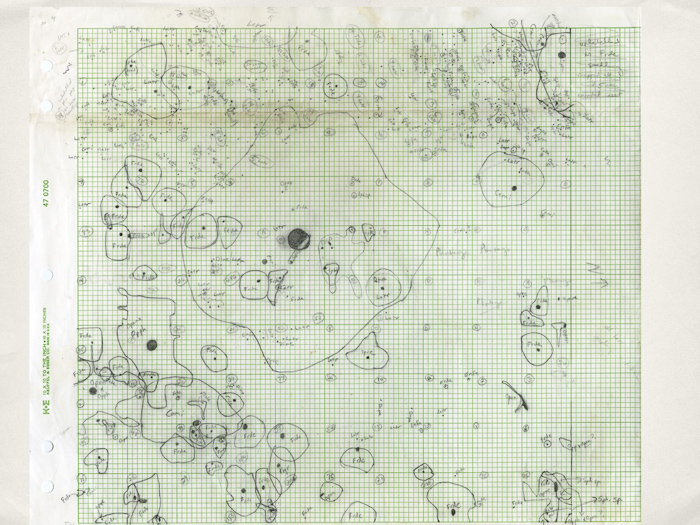 Yes, it’s a field sketch, done on location, later traced onto a formal map in the studio. I quite like it. It inspires me.

Not that the site is a scenic panorama picture spot. It’s no Yosemite Half Dome or Grand Canyon. Artists and photographers will not be flocking to capture the best view of Plot Number Nine. At first glance, it looks pretty much the same? as 10 x 10 chunk of ground next to it, and the one after that. looking But that’s the interest for me. We are always chasing after the more impressive scale or sublime lighting and colors, filing the older images away as they no longer impress. But where does that end? Every dramatic picture satisfies for a while, then we seek more and greater.

Our mammalian brains are hard-wired that way: to either chase after a reward or run from a threat. We don’t realize it, but that’s what we are doing almost all of the time. We don’t spend a lot of time paying attention to what our brains categorize as neutral, neither new and therefore interesting nor dangerous. Why should we?? After we pass by a certain bush a few times and decide it is neither a threat nor has any particular value to us, we file it under “background”. Most of the world, maybe 99% of it is background. We don’t even see it anymore. Recent neuroscience has found that’s literally true?our neural circuits actually fill in those spaces with older, filed away, impressions and low-res images to save processing space. We notice only what is changes or moves, then file it away again into the backdrop of our life dramas.

But those neutral areas, things like the texture of a rock, the light on a palo verde branch, the shifting shape of a cloud, that are at first unremarkable, are windows or doors? into the unknown.? Who knows, these overlooked places may actually contain most of the content, maybe even wisdom, of our world. It’s the proper domain of art: those areas outside the box our brains want to put everything into.

There is an ancient story of a gold nugget dropped by a traveler crossing a worthless, rocky vacant lot filled with trash and avoided by all. After some time the nugget becomes burried and encrusted with dirt so it looks like any other valueless pebble. The person who one day picks it up, maybe centuries later, and scrapes away the surface covering will find a gold nugget. In Buddhism this is considered a parable about achieving insight. It’s already there, you just never noticed. One might find a little piece of themselves lying out there out there among those neutral details.

Plot Nine is not uncharted territory. It very well known in terms of coordinates, soil, climate, changes in species composition over time, amount of ground cover, germination and deaths of plants, etc. Those are the kind of data that scientists track because they answer particular questions.

My questions are different. Actually, I don’t even know what they are yet. So as soon as my application for off-road artistic research comes through, I’ll be spending some time at Plot Number Nine, observing details the scientists might have missed, or were not interested in. I’m sure some drawings, images, maybe a poem might come out of this exploration a few meters off the well-traveled road, in unknown territory. 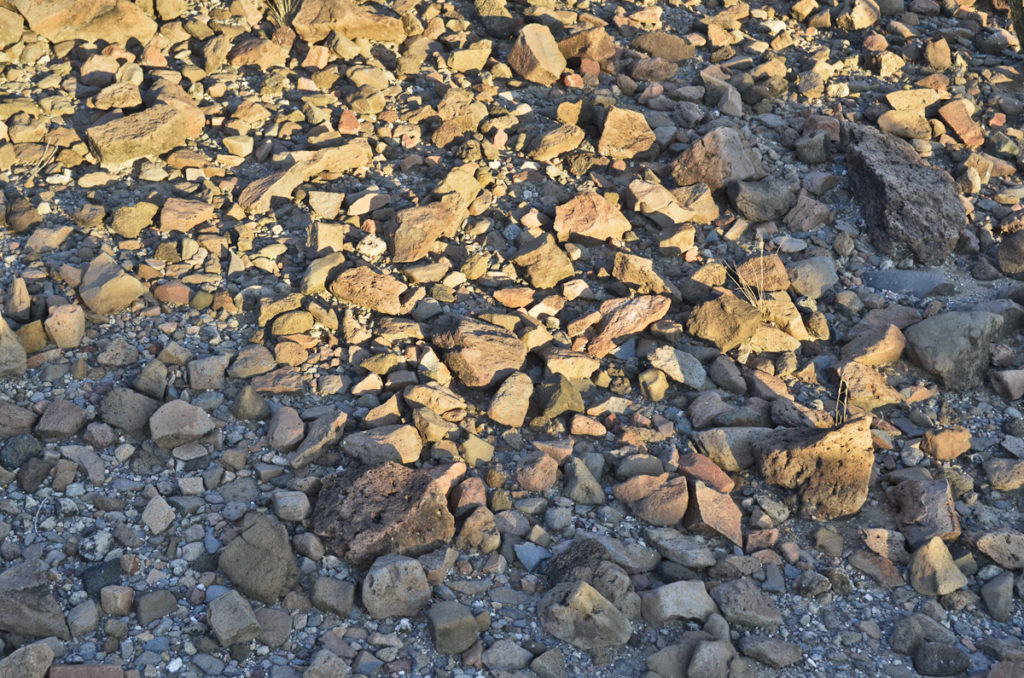