Sometimes while walking the Hill, I fall within hearing range of a fellow citizen who is listening to a transistor radio on a speaker. They are probably unaware of how far the sound carries and how distorted it sounds to another hiker.? They might as well be carrying a small battery-operated rotary saw, for the effect their music sharing has on me.?

I’ve been tempted to politely grasp the radio and then fling it as far as I can into the desert?but that would be littering of course. If I was king of the hill instead of just fool on the hill, I’d make it a rule to use earbuds. Right now it’s just a suggestion. I once made that suggestion to one such transistorized gentleman that he, next time he comes walking, bring some earbuds. “They only cost 10 bucks at OfficeMax,” I told him. Many people come to the hill for a quiet, maybe even contemplative walk. At least to get away from the city, no? He did not understand. Looking flustered, he turned his music off and kept on walking. That didn’t work, I thought to myself.

Sometimes I walk up the hill just to listen. I am for people being in a special nature preserve like Tumamoc. Like me, each one is attracted to the place for some conscious or unconscious reason.? I enjoy the sound the footfalls of different shoes make all going in and out of sync, the heavy breathing, the fragments of passing random conversations, the light nothings that make up most human speech. Still, I’d like to try to compile some of these overheard snippets and arrange them until they read like a poem. Sometimes a runner will cry out or moan in some kind of pleasure or pain. Underneath this there is a layer of distant sounds of the railroad, a motorcycle, interstate 10, a jetliner, or the helicopter landing at St. Mary’s hospital.

Once last fall a drummer set up at the top of the road (within authorized boundaries) beating a rhythm that could be heard all over the mountain. It made me wonder how far drumming from ceremonies that might have been conducted on the summit in ancient times could be heard. Maybe in the prehistoric village that once stood where St. Mary’s is now, or the one at the base of A-mountain?

Underneath this are bird sounds which I’d like to learn to identify, a distant pack of coyotes. The wind. Then under that, is silence, but we can not hear it. As John Cage explained in his book Silence, we can’t experience silence. There are always two small sounds when all outside is quiet: the low throb of the blood flowing in our ear, and the high pitched whine of our nervous system.

Sometimes I am neither listening nor seeing anything as I walk. I get back to where I started without remembering how I got there.

During such a walk a few days ago, wrapped up in my own thoughts, I caught a movement in a Palo verde tree beside the road, with a tufted, flycatcher-type haircut. I expected a Phainopepla because of the mistletoe growing on the tree, but this one was grey. Trying to memorize everything I could about it before it was gone, I looked it up in Google on my phone and it turned out to be the female of the species. Of course. I expected a shiny, blue-black, shiny, arrogant male, one of the easiest birds to recognize. These birds follow the mistletoe berries north as they ripen, red and juicy for the holiday season. Even the mistletoe can fool us if we don’t look closely?there are male and female plants.

Scientists have recorded Phainopeplas imitating the calls of at least thirteen other birds. Maybe to additionally confuse us, which is another way of saying just to keep us paying attention. Knowing that bird’s name and pronouncing the Greek syllables in my mind that day made me happy. I had been in the right place at the right time and I had noticed something.

Identifying a bird or plant is like fitting the first couple of pieces to a thousand-piece puzzle. We? start seeing other things as well. In themselves, the names aren’t that important?committees of biologists make those high-sounding labels up. It’s the noticing and seeing that helps us.

We can contemplate our own biology. The navel is a popular meditation, but overused in my opinion. The oldest known mindfulness technique, called vipassana in Sanskrit, does just that. It has you just following your breath with your mind. Vietnamese Buddhist monk and writer Thich Nhat Hanh has spoken and written beautifully on simple walking as a? meditation.

In plain English, these mystical traditions are just suggesting we become aware of our own awareness. Simple, but hard to do. But it’s been considered more valuable than accumulating factual knowledge.

Anything?your own thoughts, something out there in nature, a radial saw?can be an object or a support for meditation. The Tumamoc road is a perfect place to practice: the constant talk show of the mind turns down and one notices more details in the landscape.

Tumamoc road is a perfect place to practice: the quiet eventually created in the mind just by the slow steps coordinated with one’s breathing allows for a kind of expansion of vision?one tends to notice more and more in the landscape.

But to get to the point, this is a book report.

In his new book, The Forest Unseen: A Year’s Watch in Nature, biologist David George Haskell publishes the daily? observations he made for a year of a small patch of ground in the Tennessee woods near his home. He had the idea after seeing a group of Tibetan monks make a sand mandala on the campus where he teaches biology. About a meter square, the mandala symbolized and seemed to contain the whole universe. The painstaking act of creating it, taking about a week, was a end in itself. A meditation. In keeping with the impermanent nature of all things, the sand was swept up and poured into the nearest running stream. I once watched this process during a visit of some Tibetan monks to Tucson. When they were finished making the mandala, they poured the sand into a dry wash.

Haskell’s mandala was a circle about the same size, a square meter. The connection between study plot and mandala is easy for a biologist because the quadrat was one of the first tools of the new science of ecology that was developing around the beginning of the 20th century. It is the basis for the long-term study plots on Tumamoc marked by Volney Spalding in the same way Haskell did. Biologist’s quadrats can be of any shape and size, even circular.It’s what humans do? we can’t look at everything at once. We set up a little boundary.

The plots on Tumamoc are only looked at every decade or so because the object was to map long?term change in plant associations. Stepping back a bit for perspective, the whole mountain, all 860 protected acres, can be seen as a mandala for contemplation of the Sonoran Desert.

Haskell went to his special spot every day and kept notes starting with whatever observation came first to his mind. Of his chosen scale he says:

Indeed,the truth of the forest may be more clearly and vividly revealed by the contemplation of a small area than it could be by donning ten-league boots, covering a continent but un-covering little.

And he asks the question, “Can the whole forest be seen through a small contemplative window of leaves, rocks, and water?” You can listen to a good interview with David Haskell on the Diane Rehm show on NPR here.

Seeing a whole by closely observing one small part of it is not just a mystical Asian idea. Haskell cites William Blake’s often?quoted opening of his poem “Auguries of Innocence”:

To see a world in a grain of sand,

And a heaven in a wild flower,

Hold infinity in the palm of your hand,

And eternity in an hour.

One does not need to know what an augury is to contemplate these lines. As I like to point out, 19th century geographer, explorer, and super?scientist Alexander von Humboldt in his life work, the multi-volume book Cosmos, considered the whole universe an infinite interconnected unity like a mandala. The task of science was to look at it all piece by piece fit the pieces together, whether it was through collecting data points or making a painting of it. Our observations were part of the Cosmos.

Still, my favorite cosmology comes from the two-thousand year old Avatamsaka Sutra, translated as “Flower Ornament Scripture”, sometimes called Indra’s net. In a nutshell, the image is that of a multidimensional net stretching out to infinity in all directions. At the “eye” or node of each thread in the net someone has tied a jewel. Each jewel reflects every other jewel within that infinite network.

So with all that going on, why would someone hike up Tumamoc with a transistor radio? I don’t know, it may be their meditation. I don’t want to become the auditory police. I’m just trying to listen for a Phainopepla call. 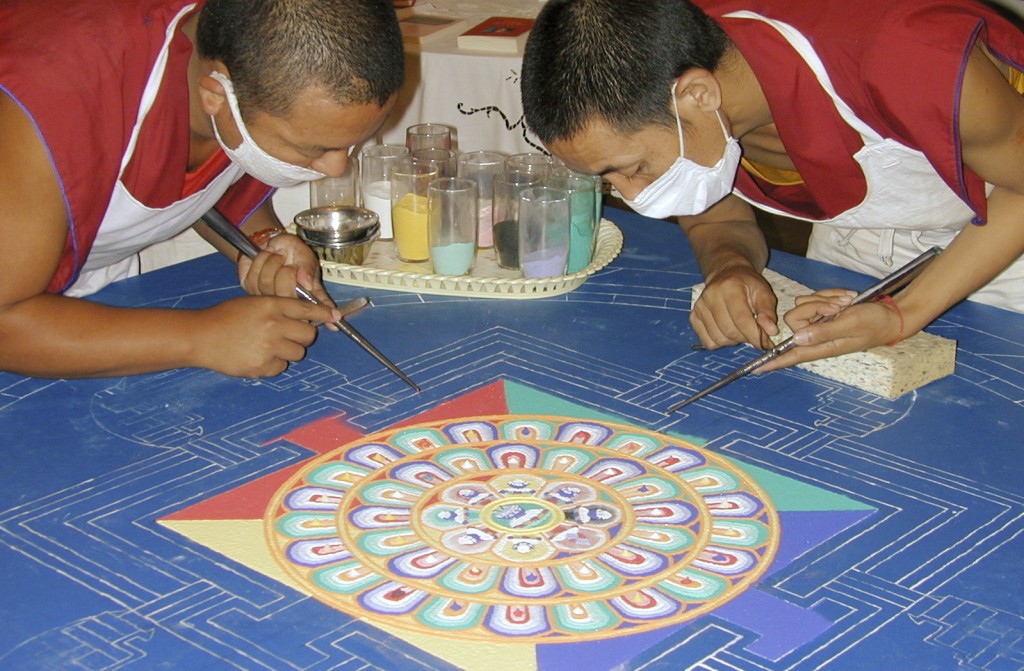 One thought on “Contemplative Biology”