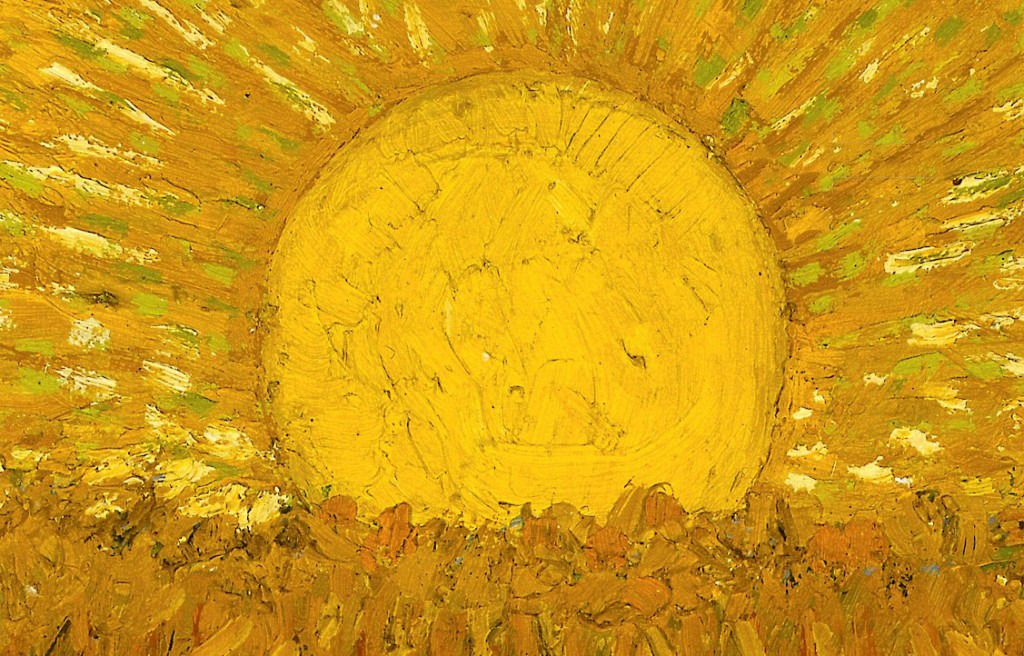 Hawk moths can distinguish the different colors of stars. Bower birds invented perspective long before Renaissance painters did. The oldest known human artworks are a collaboration with fungi and bacteria.

Answering questions you never thought to ask, ecologist Peter Warshall gave a presentation on his work on color last Novermber 28, 02012 (that’s not a typo?it’s how the the sponsor, Long Now Foundation writes dates). Enchanted by the Sun: The CoEvolution of Light, Life, and Color on Earth, was hosted by the Long Now Foundation in San Francisco.

The mission of the Long Now Foundation? is to encourage “slower/better” thinking and reverse the? trend in our civilization toward short-sightedness. The attention span they are talking about is on the scale of 10,000 years or so. A curious thing about this effort to think in 10,000 year spans is that computers can not currently understand a date with five digits. (Ten thousands years from now the year will be 10013.)

Thinking about time in blocks that go beyond one individual life span is radical.; and very much in keeping with the kind of long-term thinking that botanists began to do at the Carnegie Desert Laboratory over a century ago, and later continued by the UA and USGS Paleobiology lab on? Tumamoc Hill. Furthermore, Peter is a neighbor living just outside the Tumamoc property, at the base of A-mountain, across from Tucson’s historic Mission Gardens project. So this topic still remains withing my study area for this blog: Tumamoc.

Peter’s resume ranges so far and wide that it’s kind of simplistic to call him an ecologist. Another poet-scientist that comes to mind, Henry Thoreau, kept two sets of notebooks, one for science and one for poetry, feeling that because of the increasing specialization of science even in his day, he had to keep them separate. Peter Warshall manages to find poetry underneath and within the facts of what he calls “pragmatic science” and weaves them together seamlessly.

I have illustrated a project here and there for Peter over the past few decades. Everything he does makes one pause to think because it’s just a little outside the box, but both mind-altering and practical. Considering the glut of information on the Web and my short attention span (especially by Long Now standards), it’s significant that I watched the presentation all the way through immediately, and will watch it again.

Warshall defines his task as that of the classic naturalist: to try to escape as much as possible from the human bias and see things through the mind of the other species one encounters. All things, from this perspective, are equally beautiful. And each species has their own version of beauty, which may be equal to or greater than ours in sophistication.

Outdoing the theme of the seminar series, Peter covers the approximately? 3.8 billion years history of the love affair between earthly life forms and light. Whether it is the work of a human painter or of another species, it’s all treated as one integrated process. An “aesthetic commons,” shared by all species, is created by the fact that the sun shines on everything and everyone alike.

The story begins with the first bacteria that learned to capture energy from the sun, “the initiator of all that is sweet,” to make the sugars that power life. Light eventually enters the living body and helps to shape it over time, eventually becoming part of the inner self as well.

Sunlight, in a sense, inspired anticipation as the molecular machinery of photosynthesis was put together to receive it, then yearning, as algae developed cilia and could move towards the light. Yearning became desire, which becomes hope, the logical precursor of transcendence. Light is even simulated by neurons in the brain, in the dark as we sleep. Images and patterns become icons, archetypes, or symbols. transcending their original intent or mechanism.

This is all research for a new book Warshall has in process.

Peter is not physically well and his exhaustion shows as he gets near the end of his hour-long talk plus a period for questions, extemporizing throughout after a crash of his Microsoft presentation software. Yet one can see that his passion for the subject comes through so strong that it carries the evening despite those difficulties.

Stewart Brand describes it this way:

Warshall’s talk, and his life, have been a convergence of art and science. Asked about how scientists could learn more about art, Warshall suggested they go to an art class and learn how to draw. As for how artists can learn more of science, he had two words: