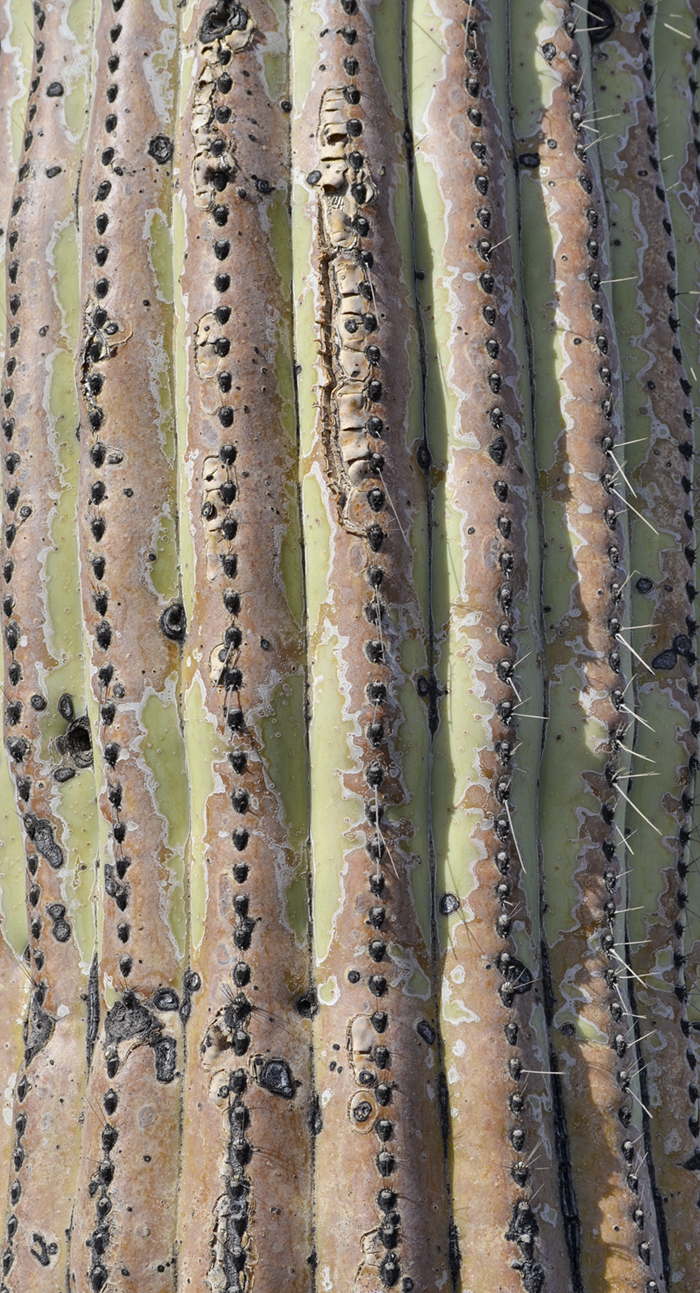 If you notice anything
it leads you to notice
more
and more.

I actually write a lot that never gets posted. Like anyone else, I suppose. Sentences usually stay in my Tumamoc journal or sketchbook or in scattered scraps to be compiled at some future dream time where everything becomes complete. Only a small part of these scribbles or photos or drawings ever get seen. For me, that’s largely because two-year-olds crave attention. They want you to notice every small detail about them and what they are doing. Leo does not want me to draw or write, or take photographs.

That’s ok. Everyone and everything thing likes and deserves attention.

Consider the Saguaro cactus. In a lot of ways, besides standing upright, they are like us. They carry signs of their life history on their skin, but it may take a sharp and educated eye to see them. My own dermatologist told me lots of things just by looking closely at the almost invisible spots on my face. He could tell I had spent decades tramping around in the desert without a practical hat. I could write an essay, based on his lecture, about the sociocultural significance of the wearing (or? not) of hats by males of different cultures. He had an extremely good selling proposition for the overly practical hats his office had for sale on a rack. Yet I didn’t buy one.

I now wear a hat just to hide all the burning inflammation that doctor’s medication caused on my forehead. I don’t want any attention. Neither do I want anyone to notice all the sun damage to the finish on the south side of my truck (as it has been parked in front of my house for 15 years.) When the new skin grows back?not the truck’s ? I’ll become a hat-wearing bloke if I can decide on a style I like, and it will all turn out ok. It’s saguaro skin I’m interested in.

Last year about this time, I went for a walk with Ray Turner up the road from the Desert Lab. We were looking for potential spots to place small interpretive signs pointing out something to notice in the landscape nearby.

Ray pointed to the tan color near the base of many of the saguaros. “See that? It’s freeze burn.” The oxymoron intrigued me. In addition, he had me notice that the yellow ochre color tended to be only on the southeast-facing side of the cactus, near the bottom, and mostly on the outer edges of the pleat.? These undramatic clues that I now started to see everywhere were not really new to me, yet I had never really given them a second glance.? After a while, I could tell freeze burn from age spots or mammal teeth marks.

The story goes like this: Cacti wisely store their own water in their tissues, enabling them to survive desert months of no rain. On the other hand, this strategy makes them vulnerable to freezing. During freezing weather at night like we had this past week, the outer parts of the saguaro surface start to freeze.? Now, if the temperature didn’t rise above freezing the following day, the whole saguaro would die. As it is, that long a freeze rarely happens in our area. But after a tormented, frozen night, when the winter sun rises in the southeast, the first rays tend to warm up the cactus skin. But thawing too fast causes the damage?the freeze burn spots. Actually dead skin.

It’s the same with humans when we get a case of frostbite, Ray explained. Our outer digits can recover from a little freezing as long as they thaw out slowly. Many a mountain climber has made the mistake of warming frozen toes too quickly by a fire and losing those toes to gangrene, ie. death of tissue.

Freeze burn does not harm the saguaros, but it leaves a permanent mark. Cacti and many other desert plants can tolerate parts of themselves dying off. Cacti can’t regenerate skin like we do. They carry their history on their skin for life. For a cactus the dead arms or sections of skin may just remain there, adding a deserved look of grizzly wisdom and experience to an individual who has stood in that same spot for maybe hundreds of years.

Or body parts like saguaro arms might fall off. The whole cactus might suddenly collapse soon after a hard freeze, like one giant saguaro next to the Tumamoc upper road did last year, frightening a couple of young walkers. Or it might fall over eight or more years later. But whenever it does, it’s no big deal. In the desert, the distinction between alive and dead is not that clear cut. Fallen saguaro arms can lay on the ground for months, then bud and flower the following May. Many dry, shriveled up plants suddenly rise again after a rain. You should not be too quick to pronounce a desert plant dead.

Freeze burn is a sign that we are near the edge of saguaro habitat. Since the saguaro is the signature plant of the Sonoran Desert, we are near the edge of that too, as mapped by early Desert Lab director Forrest Shreve. It’s not intuitive at first, since what Shreve called the “Arizona Upland” region of the Sonoran Desert around Tucson? contains some of the densest forests of saguaros. That’s because of the increasing elevation, and therefore higher rainfall. The flip side of that fact is that a few miles farther north or east, saguaros, and therefore the Sonoran desert as we know it, will end as freezing temperatures last longer. The borders of our desert are determined by many factors, but the most significant is the freezing weather.

Shreve found that saguaros could withstand 15 hours of continuous freezing temperature. None could survive 29 hours. Thus the rule of thumb that saguaros can stand one day of freezing. But even after that, it’s still hard to avoid the freeze burn.

Shreve’s term “Sonoran Desert” expresses a hidden truth. Columnar cacti originated from tropical plants much further south. Saguaros are from Mexico. They hate the cold. Margaritaland is where they and their relatives are most comfortable. Even on Tumamoc, the densest stands are on the southern and eastern slopes where it’s warmer. These northern cacti can be considered outliers, pioneers, explorers seeking the outermost fringe of life. It shows on them.

One thought on “Freeze Burn”