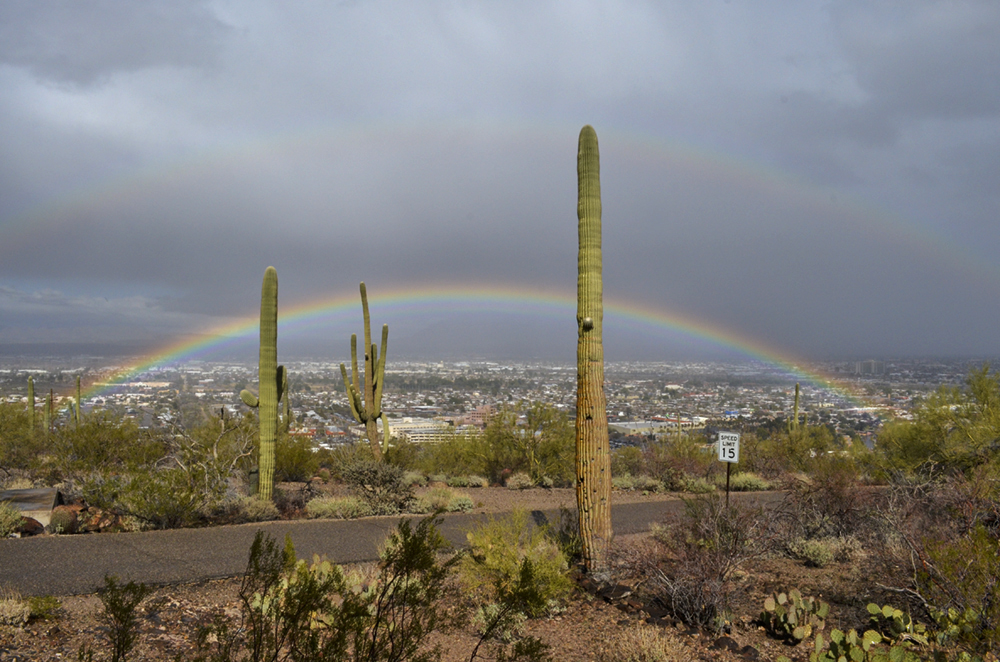 Yesterday afternoon it was cold, dark, and rainy up on the Hill. I was the only person at the Desert Lab. I happened to glance out my northern window and saw the most amazing rainbow as sunlight broke through a hole in the clouds behind the Hill. It looked like it was just outside my window. I grabbed a camera and ran outside, knowing it would be a fleeting event. This sight lasted maybe 5 minutes and was dependent on where I stood.

Plato and Aristotle didn’t think so, but maybe one of the ideas that define beauty is impermanence. The fact that it that would not last caused me to run out after it. Maybe I would have chased it if it was moving. Actually, it would keep moving as I ran.

I got a picture of it, but that will not last forever either. And I spent time cursing and fiddling with the setting on my new camera, which I still don’t completely understand how to use. Maybe I’d have done as well to just stand there in awe and experience the sight. The eye captures far more than a lens. I did that for a time. This is one reason for spending a lot of time at one place to get to know it. Like most things, you have to be there.

You could see the subtle anatomy of a rainbow: the reversed and fainter outer secondary rainbow, the darker air between them, the brighter region inside the main arc, the supernumerary rainbows?maybe 3 or 4 faint arcs just underneath it.

While I’m on rainbows, this is another similar event over Tucson I photographed last August. A panorama or several frames that I stitched together later.

One thought on “Rainbows”