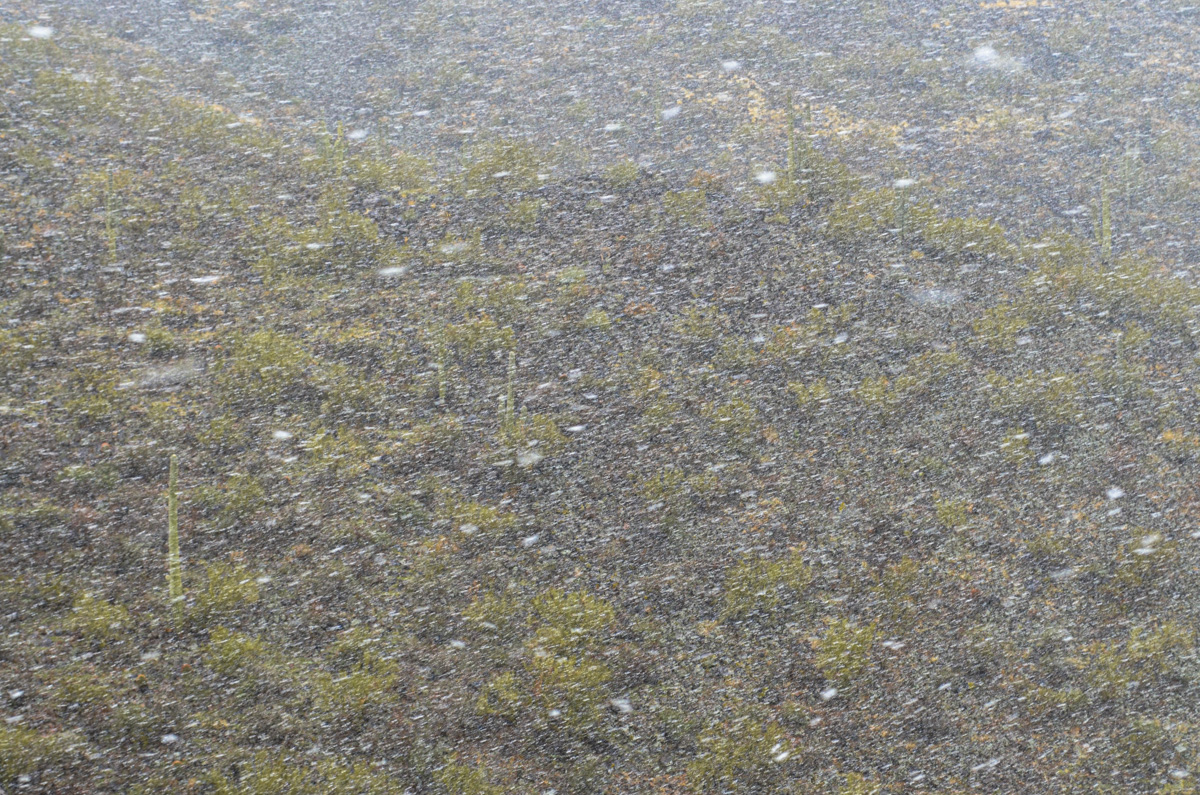 IN MY last post, I was running out my office door on Tumamoc Hill with my camera to chase a rainbow. Yesterday I ran out chasing snow flurries. I would have gotten some of those cool photos of cacti with snow on them, but the snow didn’t stick. and I got cold and wet.

We are easily enchanted by beauty, whatever our idea of it, and want to capture it or hold onto it. Yet it’s ephemeral. And after the work of shooting and the processing, and admiring resulting photos after trashing the bad ones, the glow fades a bit. There are imperfections. It does not look as engaging in 2 dimensions as it did to the eye in the moment. Maybe I’ll edit the image, to bring out the colors or contrast or sharpen a bit.

The result is just another pretty picture. Then one wants to go out again and find an even better view and make an even better picture. The pursuit of beauty, like drinking seawater, creates an unquenchable thirst. We suffer from beauty and pleasure as much as from pain.

There are thousands of photographers like me chasing rainbows or storm clouds, standing at scenic overlooks, squinting through a viewfinder at dramatic buttes and mesas. I’ve even seen new trails to a spot where a famous photo had been taken everyone who finds the viewpoint wants to take one of their own, standing in that same spot, leaving an impression in the ground the size of two feet standing.? The pictures all start looking the same until someone takes an even better one. All the early photos of the Grand Canyon looked impressive. Now it’s hard to find that elusive new viewpoint or lighting effect that stands out and gets noticed.

I admit that the view of Yosemite Valley in the Ansel Adams calendar on my wall is pretty close to a perfect picture. And I’ll bet there is a bare spot where people stand to take the same view. Critics routinely call him the “most honored American photographer of the twentieth century.” Shot in 1940, Ansel’s composition and technical quality are still impressive in this age of Photoshop; and all it uses are ten shades of gray. That’s only if you like Ansel Adams. Back in art school, most students and professors looked at him as a cliche. You can’t really win at beauty.

Yet we seem to be wired to chase after it. Brain scientists like to point out that all our thoughts, philosophies, and civilizations are based on a fundamental neurological formation at the center of our heads called the “reptilian brain.” Its programming is simple and compelling: to either run away from or run towards something. There is only attraction or repulsion. We run towards good-looking food, a good-looking mate, or maybe a beautiful sunset. And we run away from danger,? pain or unpleasantness. It’s called the limbic system in more technical talk. Mammals, as more recently, humans, added new layers upon this basic foundation. These outer layers can modify those basic signals, but don’t change them much. The limbic system works faster than thought. We run first one way, then the other.

Yet, if we were surrounded by rainbows all the time, we wouldn’t even notice them anymore. If the mule deer and fawns that excite hikers on the Tumamoc road were standing there all the time in the hundreds along the whole route (which would be an ecological disaster) people wouldn’t pay much attention to them, any more than they do the scattered rocks on the ground or the nondescript prickly bushes that form the background of the desert landscape. That’s because of another function of the brain called habituation: our response to an event declines after many repetitions.? Things that don’t pose a threat or attract our attention are relegated to the background. We don’t really see them anymore. About 99% of the world becomes the background for the things we are chasing after or running from. It’s not beautiful anymore.

A good example of habituation is when you walk into a kitchen: you can smell what’s cooking, but after five or ten minutes that scent seems to have gone away. It hasn’t. we’ve just become habituated to it. But it might as well be gone. Unless we are chasing it or running away, most of the world exists in this way for us. It’s neutral background.

Habituation is not just ignoring data. We often don’t even bother to take it in. We fill a lot in from stored data. The background that we have become habituated to isn’t really worth the mental energy. It seems that only a small fraction of what we see comes through our optic nerves from the external world. Scientists were surprised and are still mystified by the research showing this process.? Most of the brain’s processing is completely internal. We are not like a video camera, recording a scene as we walk through it. Much of what we experience is simply inferred, interpolated, or filled in from memory, past experience, or our vast picture reference file of things we’ve already seen before. Most of what we call the world is put together from our thoughts about it. It’s kind of like we have an internal Photoshop application in our brains.

Beauty is a pain. That’s because it’s often not as perfect in reality as it was in our imagination, or even if it is, we can’t make it last. Or if we do, we might lose or damage it. The photos I took of that rainbow will eventually be gone, even when printed using archival paper and inks. Beauty is impermanent and dependent on conditions that we can’t control. Satisfaction is never complete, but always just a little further on. When you chase a rainbow?it keeps moving away from you as fast as you move towards it. One Buddhist text compares the pursuit of pleasure as ‘licking honey from a razor.” Or in the words of an ancient Jewish teacher, it’s “chasing after the wind.” (I’m not a preacher, just a recorder of what I see and read.)

OF COURSE, it must be obvious by now that there is another way. No, it’s not chasing after suffering. Start by paying attention to what is neither Beautiful (at first) nor Ugly (at first). It’s the neutral, the Boring. Not important to the limbic system. The 99%? of reality that is usually filled in by the brain from its “clip art” file of saved scrap images. It’s mostly unexplored territory and may be beautiful. A gold mine for the artist or writer.

I’m now inspired to go out and do some work on that stuff we don’t see. Of course, 100% of it will be boring at first. But maybe eventually, I’ll reach only 99% boring. That’s at least 1% of good stuff coming from a huge reservoir of the whole world. Good enough odds of seeing something.

Buddha’s Brain: The Practical Neuroscience of Happiness, Love, and Wisdom, by Rick Hanson

One thought on “Chasing Rainbows”