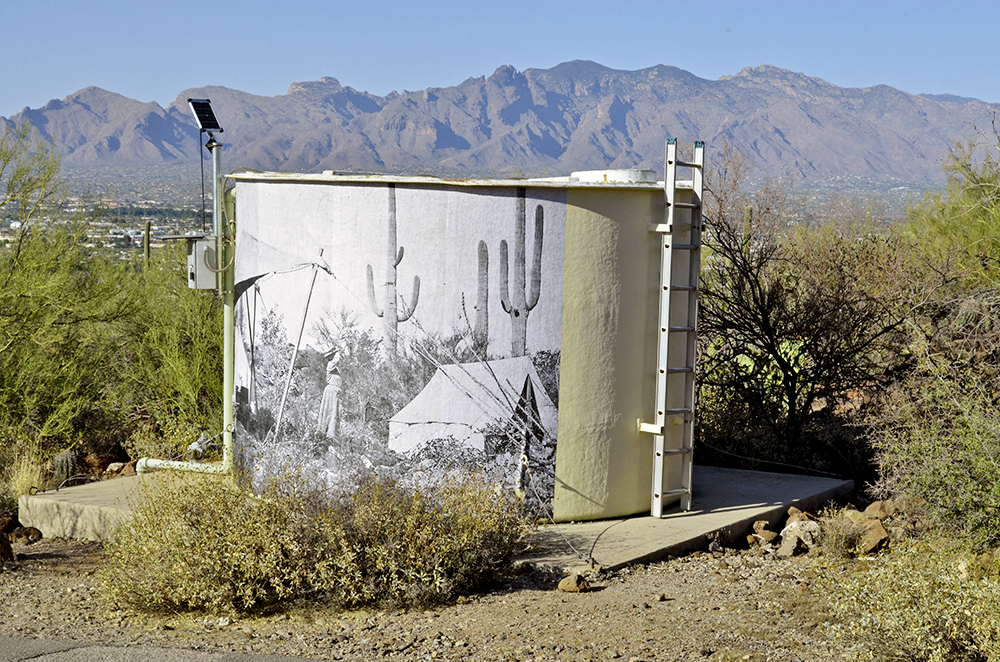 I DON’T THINK ANYONE walking up Tumamoc Road in the past week, unless they had blinders on, missed the new photo mural installation on the water tank just up-slope from the Desert Lab. The idea came in a proposal by Tucson artist Janet Miller as part of the Tumamoc Hill arts initiative, which encourages artists and writers to conduct work on the Hill which engages the public, is appropriate to and specific to the Tummaoc site, and does no harm.

The installation began to engage visitors as soon as Janet and her collaborators, Josh Schacter and John Sartin, unloaded their truck. Many people stopped to watch and ask questions. What is that stuff? The mural is printed on large rolls of inexpensive paper on a large traditional copy machine, fit together as a mosaic, and mounted with wheat paste adhesive. In keeping with the terms of not adding anything to the Tumamoc landscape, the materials will all degrade gracefully, probably by the end of monsoon season, then be removed. It is a temporary work, the first of others that will take its place.

To answer the question posed in my title, the woman is Mary Lloyd, formerly Mary Elizabeth Hart. The two met at Columbia and Mary gave up a career in teaching to marry Francis E. Lloyd, then a professor of botany at Columbia University in New York City. Francis visited Tumamoc Hill first in 1904 and became interested desert plants. He published a paper on what triggers the ocotillo to leaf out after a rain.? He returned in 1906 with an offer from Desert Lab director Daniel T, MacDougal of a staff scientist position at the newly created Carnegie Desert Botanical Laboratory on Tumamoc Hill.

No one knows for sure if Professor? MacDougal was aware at the time that this position only had funding for six months. But his offer did entice Francis Lloyd to resign his tenured professorship at Columbia University to come to Tucson. At the time, the biology of desert environments was so cutting-edge, exotic, and little known, that the Carnegie Desert Lab, established in 1903, was almost like a small colony on another planet. MacDougal once called it a “Mecca” for botanists around the world. The big question on everybody’s mind was, “How do desert plants survive with so little water?” So besides the job, the place itself was attractive to scientists wishing to make a unique contribution.

I also don’t know if he and Mary expected to be living in a tent on-site, a few hundred yards down from the laboratory. In the photograph, Mary is pregnant with their first of two children, Francis Jr, and David.

Francis and Mary’s descendents still live in Tucson and I hope to learn more from them some day.

FRANCIS LLOYD DID A LOT during his his six-month job at the Desert Lab. His pioneering research on plant stomata, or stomates, the microscopic pores through which plants breathe, was continued by others and still stands today. It also makes for a good little botany lesson: Stoma is the Greek word for “mouth,” and stomates do look like little mouths. They are bordered by a pair of guard cells that open and close like gatekeepers, and which look a little like lips. They look kind of like a few other things, including eyes and Hohokam ballcourts.

Plants, you will remember from high school biology class, must take in carbon dioxide for photosynthesis?the green force that drives life on Earth. Plants combine the carbon with water and sunlight to make carbohydrates: sugars and starches?energy-storing molecules?and release oxygen as a by-product. The essential gasses in the air diffuse into and out of a leaf through the stomates.

Stomates are also where water is lost through transpiration. In deserts, the water loss through transpiration was calculated to be enough to kill almost any known plant. It was a mystery that appealed to Francis Lloyd. How did desert plants survive this water vapor loss in an environment with such high evaporation rates. Were they super-plants? Lloyd found that many desert plants have a specialized mechanical and chemical method for closing the guard cells during the day and opening the stomates only at night, when it’s cooler.

But that raised another question: How can photosynthesis happen when the stomates are closed?

It had been known for decades that prickly pear cacti, Opuntia, tasted bitter in the morning and sweeter late in the day. Using this taste test, scientists found that there was a daily cycle that alternated between acidic and sweet taste, and it corresponded to relative amounts of a mild acid that gave way to carbohydrates during the day. To thicken the plot, this cycle even continued when the lab was kept in total darkness. One graduate student was required to test for starch vs acid content in leaves every two hours in a dark lab for a week.

At the time Lloyd did his work on Tumamoc, the complex biochemistry of photosynthesis was still being worked out. Over the next 60 years, the role of stomata became critically important as scientists puzzled out those details. Along the way they discovered a variation of photosynthesis called CAM that evolved in plants of arid environments around the world. The Jade plant was used in early work on this. These desert succulents can make sugar while the sun shines even with their stomates shut because they could store the CO2 taken in at night in the form of the 4-carbon malic acid. The reason cacti tasted bitter in the morning was the acid form in which they stored the carbon dioxide taken up during the night. By late afternoon the acid was used up as the carbon was used up to make sugars with the energy of sunlight. So, I suppose, late afternoon is the best time to harvest prickly pear pads to fry up for a dinner of tunas.

In addition to their schedule of opening and closing, and plants can adjust their density number of stomates as they grow in response to their environment. So stomates control a plant’s rate of photosynthesis. These tiny stomates, invisible to the naked eye, breathing in and out together all over the planet, sensing and affecting the levels of carbon dioxide and oxygen in the atmosphere, have a global impact by affecting long-term climate change. In a study published in the journal Nature, scientists calculated that 40% of all the carbon dioxide in the atmosphere moves through all these stomates every year.

3 thoughts on “Who’s That Woman on the Water Tower?”