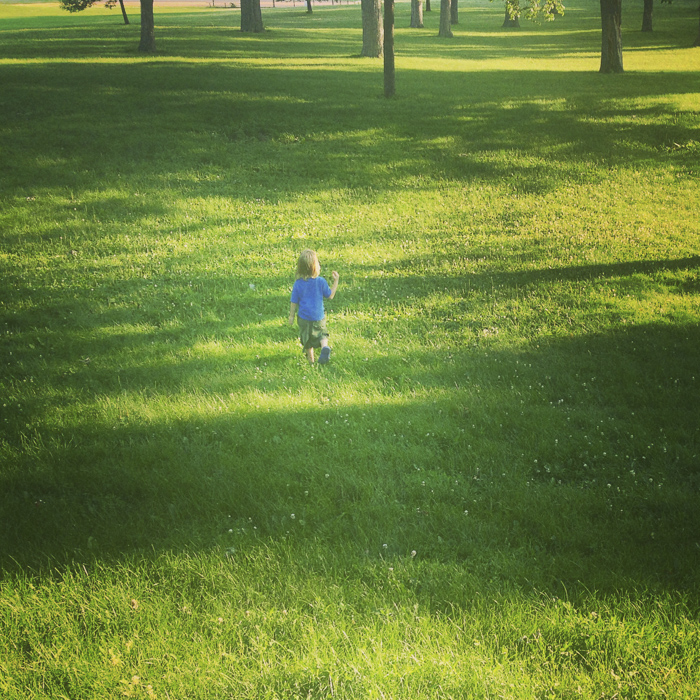 TAK KENAL, TAK CINTA.
If you don’t know something, you can’t love it.
?Malaysian saying

Tucson is a pretty wild place, compared to most cities of its size. It has Tumamoc Hill, and a network of washes that run through the city, yards or parks planted with native plant species, vacant lots that go their own stubborn way. In other words, fingers and pockets of wild Sonoran Desert stuff are part of the city?either as invaders, tolerated, unknown, or by design. Anywhere you look in town, you see the ring of familiar mountains and know instantly which direction you are facing. When done intentionally, this layering of culture and wild nature is called reconciliation ecology?the study of ways to integrate the local ecosystem into a human build environment in a mutually beneficial way. The simplest way to do this is just to do nothing?allow things to grow on their own. The Desert Lab on Tumamoc Hill is a focus for this kind of research. It’s a great idea.

Yet, to me the idea goes beyond encouraging biodiversity, good landscaping design, giving a sense of local belonging in an urban landscape, or providing habitat for native species within the city limits. Seeing little pieces of wild nature in an urban environment is good for the mind. And the soul if you think you have one. Even seeing native weeds in a vacant lot inspires new trains of thought that would not otherwise occur to me. They are like dissident infiltrators from the non-human world, a counterculture that has no language, but just needs to be noticed. When you start to look more closely at things, they draw you in, then start to challenge our human-centered beliefs. They come from outside the box.

When I travel, I look for how different cities blend or don’t blend with their formerly uncivilized site. This summer, it’s the neighborhood where I grew up.

On vacation at my family home in St. Paul, Minnesota, I still can’t stop thinking about Tumamoc and what’s happening back in the Sonoran Desert. I don’t like to miss July in the desert. Before leaving Tucson, I did get to witness the first monsoon, and importantly, the hot and dry months of April, May and June that lead up to that first build-up of cumulus clouds over the mountains, the cool scent of moisture in the air, the wind storm, followed by driving, cold, wet rain. It is impossible to explain the pleasure, much less the deeper meaning of this to someone who has not spent those months of longing and desire. It’s the process that leads up to the rain that gives it its mythological charge, like the slow build-up and quick climax to the plot of an ancient Greek play. Will everything dry up and die of thirst this year? Or will we be able to bring down the rain again, with poetry, songs, ripe saguaro fruit, wearing red, whatever works. It’s real life drama.

The English name “Minnesota” comes from the two Sioux words for “water” and “sky-tinted.” True to its name, it’s green and wet here. Landing in St. Paul after that annual spectacle of the monsoon was like being transported to Tlalocan, the watery green heaven the Aztecs placed just beyond the sky, ruled by Tlaloc, the deity of rain, storms, fertility and agriculture. Tlalocan is a place of lush green vegetation, flowers, springs, lakes and rivers; the season there is always Spring. The prevailing emotion is pleasure and joy. That’s because it satisfies a basic human desire: to be wet.

Ancient murals showing Tlaloc and tlalocan were uncovered in the ruins of Teotihuacan, which flourished between about 100-300 BC and 600-700 AD in central Mexico?contemporary with the prehistoric villages on the summit of Tumamoc. It would be ridiculous to state these cultures didn’t know about each other, and there are signs of this rain and water worship on Tumamoc as well, just more subtle. And prehistoric trails still exist that connected the continent together. It appears that Tlaloc, whatever name he went by in various cultures, was held in awe from Central to North America for longer than anyone can remember.

More than a religion, Tlaloc is central to an indigenous science, combining minute observations of nature to form an alternative cosmology, psychology, philosophy, and world-view based on the element of water. More on that in a future writing session.

Up here in the north country, Tlaloc is everywhere, yet relatively unknown by that name. People here seem to take water for granted, or maybe simply as a more comfortable alternative to ice and snow. You have to arrive suddenly from the desert to really appreciate the contrast of wet with dry. The name Tlaloc is untranslatable, but there is no other word that expresses the workings of the natural water cycle in a landscape along with the human longing for it. (I’m working on some writings that elaborate on that). Tlaloc makes seemingly miraculous changes in the Sonoran Desert when he comes every year about this time, like some holiday personality.?I saw Tlaloc happening a few days before I left Arizona, as dead-looking desert plants like brittlebush and limber bush started sending up new green shoots almost overnight, seedlings that sprouted in a matter of hours, spadefoot toads heard bleating from puddles in urban neighborhoods. Everything is resurrection. Or the distinction between life and death is just blurred. It’s no wonder June?the Saguaro-picking-Moon was the start of a new year for the traditional O’odham.

I went back to walk through some of the pockets of overgrown wildness in the neighborhood that I grew up in around in Como Park, in the urban Midway district between St. Paul and Minneapolis. Much of the feel of the place as I remember it remains, as well as my attachments, and that of other residents, to a network of special places in the landscape ranging from wild and neglected to cultivated: woods, bodies of water, and gardens of wild flowers. The patches of wild woods seemed endless when we were kids. We played Tarzan, held guerrilla maneuvers; the Como woods held a hint of mystery and danger. We didn’t know what would happen or what we’d find next. Surprisingly most of those tracts of impenetrable weedy woods are still there. Except for the no-man’s land across our street we called ominously, “The Pit.” It’s now a large apartment complex and parking lot. At night, in bed, one can still hear the pair of timber wolves howling from their enclosure in the Como zoo; one of the saddest sound I’ve ever heard. Decades a go it was lions, roaring in the distance at night. 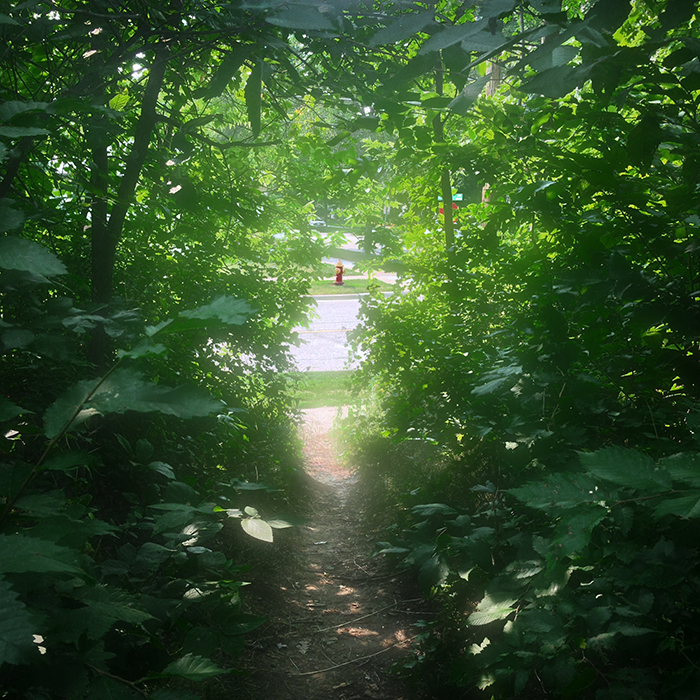 These are just neglected places, vacant lots, illegal dumps, and secondary forest, minimally managed, just over the border from civilization. Maybe the patches of woods give a relief to the people who have to mow the acres of grass covering most of the 384 acre park. No one ever goes there?poison ivy is everywhere, I can attest. Yet I like to think that the woods are also protected by some instinct in the local community. There have been several plans to make parking lots out of these woods, I’m told, but residents opted to leave them alone, do nothing, let the woods be, except for removing the buckthorn bushes, an invasive species. Hard to see how one can make such a distinction. The buckthorn is just a little too wild for Minnesotans, I guess.

Uncivilized spots are essential to growing up into a mature human being, say Gary Nabhan and Steve Trimble in The Geography of Childhood: Why Children Need Wild Places. Increasing urban engulfment has meant that more and more people grow up without much experience of the world beyond what humans have built. We need this contact, they say, in order to mature. I can’t vouch for maturity, but I agree that we need to form an early relationship to that non-human otherness; it opens up areas of our minds that would otherwise remain dormant. We expand when off we stray off the well-trodden path. (Still, when walking Tumamoc, don’t stray off the pavement.) There is something essential out there, like an amino acid, that we don’t obtain from a manicured, mowed, and architect-designed park.

I learned more in these wild places, Baby, than I ever learned in school, to paraphrase Bruce Springsteen. When I was older, I wandered for miles within the park with a worn-out copy of Walden in my back pocket. Not that any of this was really wilderness. The city of St. Paul acquired the land around Como lake in 1873. A sign encouraging the planting of native plants in home landscapes defines “native” as “growing naturally in an area prior to European settlement, which happened in Minnesota in the mid?1800s.” The reader is encouraged to plant them in their home landscape. It’s urban ecology.

Signs interpret the large recharge basins around the edges of the park. Como lake sits at the center of a huge watershed made up of roads, shopping centers, and residential neighborhoods. All the storm runoff from this area flows into the lake, including any contaminants. The basins help to catch and filter the water through the soil before reaching the lake, helping to keep it pure. Just that bit of knowledge itself expanded my mind. And my sense of place: Como Lake is the center point of a huge circle I called my home. It collects our communal runoff and residue, all mixed together, and tries to clean and redeem it.

While staying here in my ancestral home, I make the 3-mile round trip walk through the park and around Como lake. The asphalt path reminds me of the Tumamoc road, without the elevation change. The people walking around the lake look like Tumamoc walkers too, fragments of conversations sound familiar in tone as I pass them by, some in Spanish or an unfamiliar language. The whole shore is lined for 10-30 feet with wild or volunteering flowering plants, a shoreline reclamation project. I smile down at these wild things, appreciating their company for the whole walk around the lake. There are ponds planted with native marsh plants, others with exotic amazon water lilies. When I put my arms into the water the pleasure was so cool and fine, I realized this must be a sacred healing pool. The other visitors must know that already.

Without an explanation, there is a larger than life bronze statue of Schiller on a little green knoll.? I smile up at him. “Mit der Dummheit k?mpfen G?tter selbst vergebens.”

It’s all filtered down into the silty bottom mud of my psyche by now.