I HAVE BEEN WATCHING the Luminous Mother altar at the base of Tumamoc Hill for four years now, documenting the objects placed there and the changing look of the place. Every day it’s different. When Tumamoc Sketchbook reader Jenny Fiero sent me a poem she wrote there, I decided to post it with a small random selection of images I’ve made of the place over time.

A mosaic halo of blue, green, silver tiles
shines around the Madonna of Tumamoc Hill.

She stands waiting to hear people?s cares,
to lend blessings for the day.

The Madonna is draped in rosaries—
Crosses, beads, photos, left by Tucson hands.

She stands with her past reflected in the mirror,
the Catalina Mountains and saguaros sharing the reflection.

The Madonna frees the people, allowing for movement and breath
each person experiencing a sacred moment in time.

Deborah Fahnestock, who died in 1999 at age 52 owned and lived in the house just east of the altar, which is on the outside wall of “Maria’s House.” Maria, who lived there, took care of Deborah when she was sick. It’s all near the gate to Tumamoc Hill. The ashes of both women are also placed in undisclosed locations on the hill.

In 1999, knowing that she was dying, Deborah commissioned artist Greg Shoon to build the mosaic and called it the “Luminous Mother,” a name she created from her personal spiritual imagination. When Deborah died of cancer in the hospice at nearby St. Mary’s hospital, her friends carried her casket to the Luminous Mother shrine. They say that the funeral that followed was more like a a party. The shrine and altar have since become part of local culture.

The Luminous Mother figure has been so loaded down with stuff?objects of all kinds as well as prayers, wishes, hopes, and stories?that no one will ever know more than a few fragments of what is there. Humans seem to need to places like this; a safe place to put emotional baggage, have it witnessed, accepted unconditionally, and maybe to be picked up again later. We leave a meaningful object, or just a passing thought, or a prayer. Or we just walk on by, but almost everyone gives the shrine at least a passing glance. I watch many people kneel, touch the statue, or stop briefly before turning towards the Hill, making their walk a sort of pilgrimage.

The stories remain mute within the objects. Maybe that’s what fascinates me about the place and inspires the photographs. Even the light changes, the rising and setting sun illuminate the figure during the summer months?the rest of the year it is in constant shadow on the north side of the house. Objects appear and then are gone. Another piece of the mystery?there are anonymous caretakers of the shrine.

LAST SEPTEMBER, some zealot, whether vandal, admirer, or for reasons known only to themselves, pulled down the rosaries, beads, and pictures that almost completely covered the statue like clothing. Maybe they thought to relieve the Mother of all that weight. Here’s what one informant says.

There was, what I assume to be, a witch there with two acolytes, late Sept. or early Oct.? She had parked in the brick-house driveway, and I asked her to move.? She was dressed very colorfully and would only give her first name.? She was not particularly threatening, but rather odd.? I told her I would call the police if she didn?t move her car.? She did so without escalation. The next day there were lots of cheap flowers heaped over the shrine…I remember the flowers being everywhere: votary case, altar, knee-block, statue, etc.

I recall that it was around the time of autumn equinox. I imagine that the visitor in question was trying to find her own Goddess under all that debris of other people’s concepts.
I think the Luminous Mother can be anyone’s Mother. Deborah was a Buddhist, but eclectic in her philosophies and incorporated whatever had meaning for her. She made up the name “Luminous Mother.” The statue was scrounged from the Tucson Mortuary. It’s the Virgin Mary, the Mexican Virgin of Guadalupe, Tonantzin?the Aztec Mother Goddess, or anything else you can think of. It’s all valid.

According to Jim Griffith, in Beliefs and Holy Places: A Spiritual Geography of the Pimer?a Alta, it’s called syncretism, the combining of different, even conflicting beliefs or world-views into something that includes them all in a fundamental way. That’s how much of the spirituality and religion of Mexico and Southwest North America evolved as conflicting cultures interacted and combined, sometimes both destroying and enriching each other.

I see the altar as a container for the ever-changing thoughts and emotions of passing visitors. It’s open to all and contains all meanings that can be conceived or felt by humans. There is a certain beauty and mystery in that, even if we can only guess at the stories. There is a lot more and I’ll leave that for others to tell. 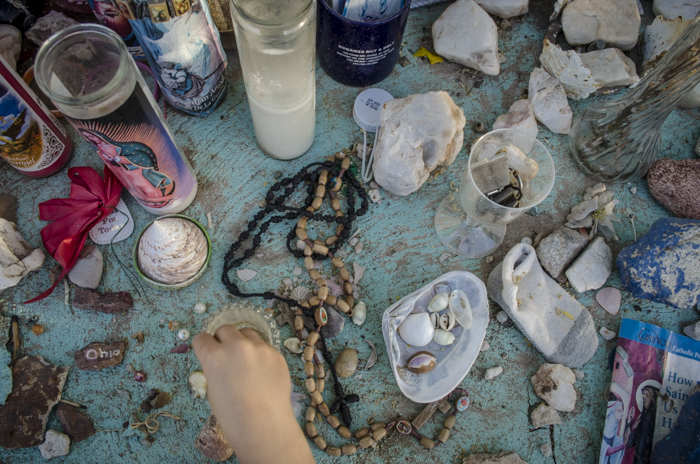