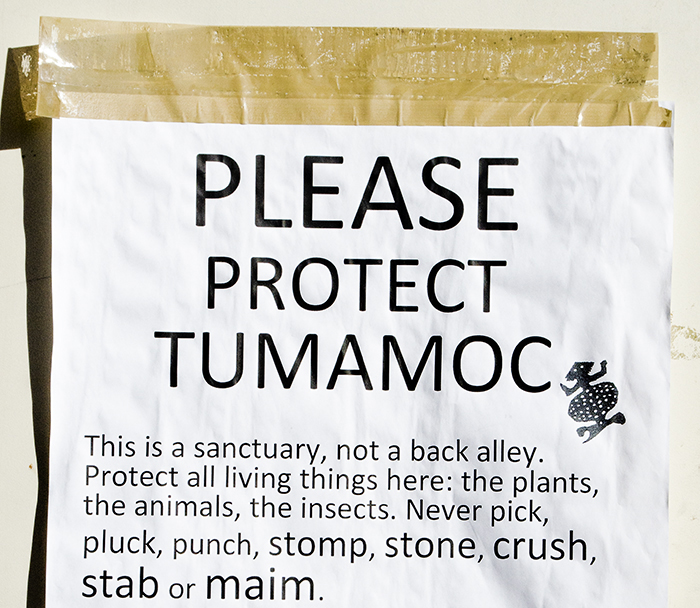 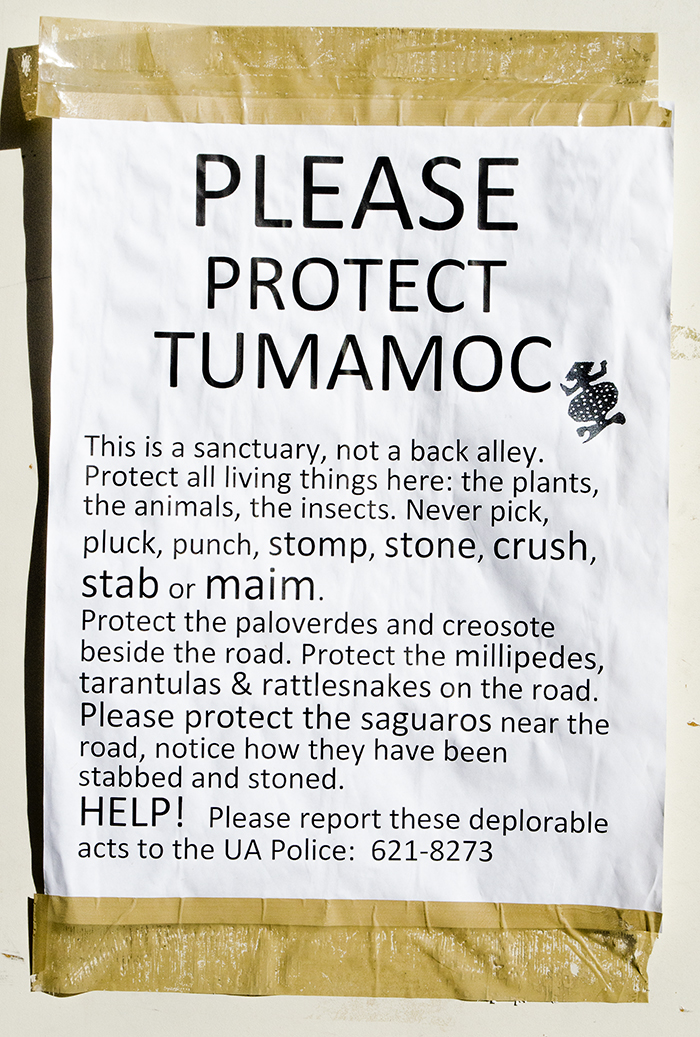 THIS IS ONE OF MY FAVORITE pieces of art found on Tumamoc last year. Two of these home-made signs were roughly taped to an empty sign-post on the Tumamoc Road last fall by an anonymous visitor. I’d like to use it as my first post for 2015.

Last September Tumamoc walkers found a large rattlesnake by the side of the upper road?cut in half. The “Please Protect Tumamoc” sign appeared shortly after that. It’s not the only case of violence against animals on Tumamoc. During the monsoon season, tarantulas are often stepped on, and there is increasing damage to saguaros that face the road.

Legally, everything on Tumamoc is protected: plants, animals?including humans, even the rocks. It’s like one of those safe-houses that even fugitives can go to get a fair hearing. Therefore it is indeed criminal to violate the sanctuary, even for snakes.

To whoever made this sign, just so you know, it got noticed by Tumamoc staff. The decision was made to take them down because they were not official, and maybe did not present quite the right tone of voice. Even the ecological signs that we designed for the Tumamoc road are slowly going through the channels. That’s why those 15 metal sign frames set out on the road-side are still empty.

The signs were not thrown away. I have one of the confiscated prints in my office and the other one is on the desk of the operations manager next to the pile of completed signs that I designed and illustrated for the metal sign frames. I didn’t say anything, but I guess that some of these ideas will be incorporated into the official guidelines that are being drafted and going through their own endless process of approvals now.

So here is my vision for Tumamoc Hill. Even before scientists came to Tumamoc, the Hill was a sacred ancestral site to O’odham, Yoeme, and Hopi people. As such, one does not mess with anything there. The Carnegie Desert Botanical Laboratory staff protected the Hill for the first 100 years, starting with the fence to keep domestic animals out in 1906. Their wish was to allow the environment here to go its own way with minimal interference so they could watch it happen. For years, as a highly protected research preserve, no one was allowed up the Hill without permission. Now many of those researchers have moved their offices back down to the lowlands, and the Hill is opened up to the community, yet nothing else has changed. The public is now welcome as long as they stay to the road and respect the place and each other. It’s pretty simple because there is no way to enforce the rules without changing the current experience of walking the Hill.

The Hill has become a place where urban people and wild nature meet face to face. It’s where the sidewalks ends. How many other cities have something like this two miles from downtown, surrounded by growing urban development. It’s a place where we can learn what the Sonoran Desert looks like. That’s where we live. Despite all out technology, we belong to this tough and beautiful place. We depend on it. And we should go for a walk once in a while where we can look out over the Wild Side. We can learn that rattlesnakes have made their home here, long before we came, and that they wish us no harm, but only want to cross the road and be left free to roam the hill.

Male tarantulas are only looking for love after 12 years of celibacy down under a rock somewhere. They travel epic distances in their search for the elusive ideal female, and have to cross many roads to get there.

Someone who would harm a saguaro, might also harm a defenseless human being. So it seems. In ancient O’odham stories, saguaros first grew from a human being, a lost and lonely young girl searching for her mother. Saguaros are treated as if they are human by the indigenous peoples living here, who depended for thousands of years on the generosity of the giant cactus for their living.

In a sense the baton is now in the hands of the local community. We will have to step up and protect Tumamoc as a sanctuary for the next 100 years. We’ll evaluate again at that time. To do this we will need to make respecting a place like Tumamoc a cultural value. A thought we have in common. We will need to treat this desert, our neighborhood, our place in the world, including the venomous animals there, as we would treat our friends and relations.

The “Please Protect Tumamoc” sign shows that this is already happening.