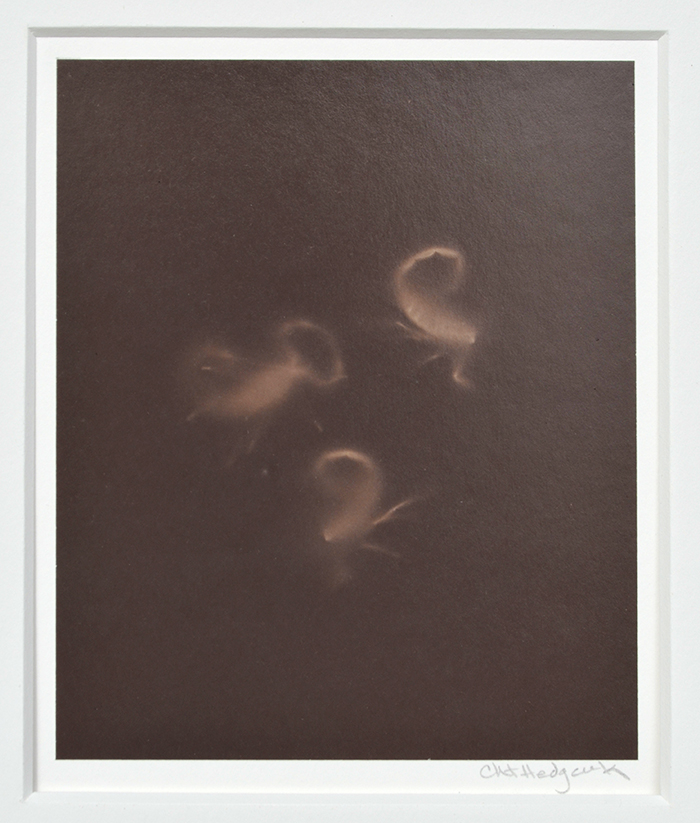 Tumamoc artists published in This Piece of Earth: Images and Words from Tumamoc Hill are showing work form the book and new work open now at Tohono Chul Gallery until March 15. Below I’ve posted a representative image from each artist.

Chip Hedgecok (above) submitted a series of “Lumen Prints.” Basically a lumen print is a photogram made by placing objects (like shed scorpion skins found on Tumamoc) on old photographic paper (in this case found in the Tumamoc darkroom) and left to expose in the sun all day. There is no developer or any other processing required, except to use old-fashioned darkroom fixer to make the image stop changing in the light.

There’s more to the story. When we were discussing his idea, Chip explained that the objects have to sit on the paper all day to make the exposure. I asked him where he was doing that and his response was at his house. I suggested, “If the objects were from Tumamoc, the light should also be from Tumamoc. The photons hitting Tumamoc Hill are different from those hitting other parts of town. We are doing site-based art work!”? I was half joking.

Nevertheless, Chip made the exposures in the Desert Lab parking lot, setting them up and leaving to come back at sundown. It happened to rain that afternoon and he called me because the prints had disappeared when he went up to retrieve them. It turned out that Professor Owen Davis had noticed them and brought them inside. Thank you Owen.

Another happy coincidence became visible when we were looking at his prints after a drawing session on the Desert Lab patio, propped against the stone wall of the old building. The brown color of the backgrounds, which is the natural color this paper turned in the sunlight, matches many of the rocks on the Hill, especially those used in the Desert Lab buildings.

We found an old Polaroid MP4 copy camera in one of the Desert Lab buildings. Chip cleaned it up and got it in working order again. That’s what Kathleen Koopman used to photograph her collection of glass fragments (above) borrowed from the old Desert Lab dump. We call it a midden. The effect shown here was created by using the overhead copy lights with the glass pieces on a lit light table. The combination of different color temperatures of the lights, and fall-off somehow created the brownish border around the edges. At first I thought she had used a Photoshop border, but no, this is real, shot all in one frame. No artifacts are taken from Tumamoc. These will remain as a sort of museum on site after the show.

Kathleen says: “This array of glass fragments, necks, and corners, expresses the beauty that can be found even in a trash pile. Weathered by accident, time and nature, these relics give a glimpse into a past time and place.”

Paul says: “Herpetologists in the building across the parking lot from me at the Desert Lab do snake surgery during the summer snake-collecting season. They insert radio transmitters and can track the rattlesnakes to see where they go and what they do. I was intrigued. What do rattlesnakes do? Where do they go?

Being a close neighbor, I was drawn to watch whenever I could. The scientists allowed me to carry a scanner into their lab and make these images during the short time-window while the snakes were recovering from the anesthetic. The images would be ruined if they moved, and sometimes they would start to wake up while on the glass. I let the experts handle them.

Barbara says: “This painting began as a brush drawing in dilute, rose-red watercolor on paper.? I use watercolor instead of pencil on the initial drawing because pencil graphite mixes in with added watercolor paint, graying it.? Pink can be shifted to cool, warm, or neutral colors depending on what color wash overlays the brush drawing.? Most off-strokes disappear as the painting is finished, but a few usually remain, which is fine with me.

“I spent a great deal of time outdoors working on the drawing, because proportion is important to me.? I think it is essential to showing the individual nature of a plant.? I don’t mind the time, because it is never boring outdoors.? Color is added as localized washes, marks, or lines.? “Saguaro green” is actually several mixes of paints, some with glazes of yellow or blue, depending on whether the area is in light or shadow.?? I’m a traditional watercolorist in that I do not use black, and pure white is the white of the watercolor paper itself.

“Everything in this painting was done on site, except for the sky.? My paints were drying so quickly in the summer heat that I did not think I could get a consistent gray throughout, so that part was done indoors.?? I returned to the site to make finishing touches.”

Meredith says: “The Yellow Month is a collection of small canvases painted during the Palo Verde bloom on Tumamoc Hill. The Palo Verde is a true native to the place, providing shade to the many baby saguaros which populate the area, habitat to many birds and shelter to lower to the ground animals. Yellow is very powerful on the Hill and I wanted to convey that. The repeated image makes a strong pattern, harnessing the fluctuating yellow and preserving it in memory.

“I’m just showing up on the Hill without much of a plan but to paint the same scene at different times of day. My palette is limited to complementary pairs keyed to an overall color cast or “hit”, say blue or orange. It becomes impossible to avoid the blooming palo verde. They glow a luminous lemony yellow. So, I have to put yellow in each painting, in addition to the complementary pair; three color limited palette for each painting.?

To conclude: some photos from the gallery installation, taken by Kathleen Koopman.

Open 8am to 5pm daily

One thought on “Tumamoc at Tohono Chul”