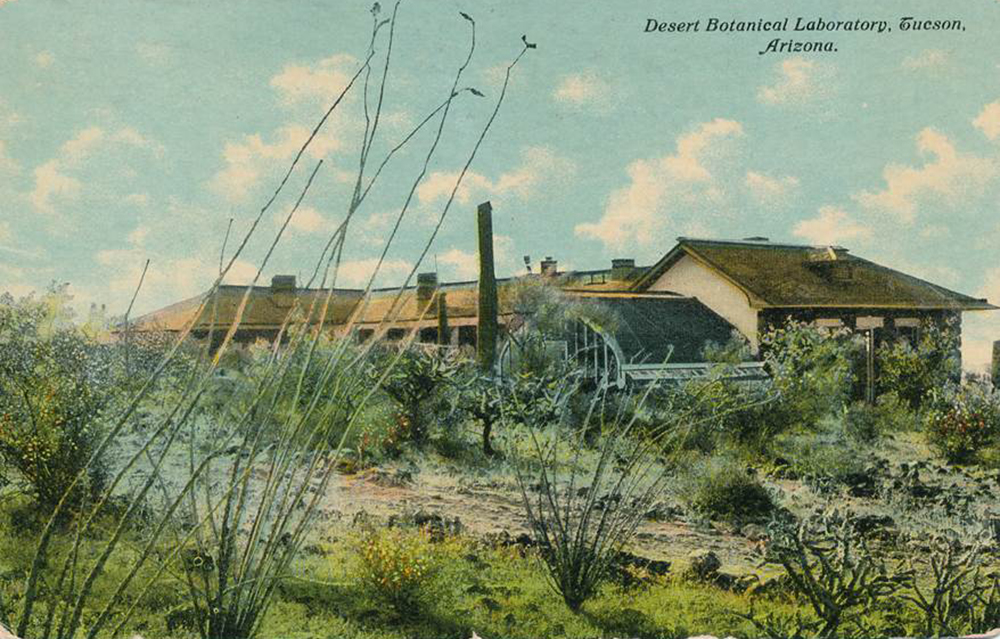 MY FRIEND, Joel Floyd, a post card collector, recently sent me scans of two vintage cards he owns of the Carnegie Desert Botanical Garden on Tumamoc Hill. I also love old post cards and had never seen these before. The original photographs were black and white, of course?the hand-colored card above was apparently painted in New York. The roof is actually a gray slate, not terra cotta, those clouds look painted in, and I’m not sure the vegetation gets that green, even in spring. But that’s a small matter?post cards need to be a little bit exaggerated. Apparently the Desert Laboratory, now mostly forgotten by the local community, was once a well-known landmark for early 2oth-century century Tucsonans.

We don’t know who the photographer was, but the post cards contain scientific information in addition to being records of a place. Dr. Owen Davis has created a new saguaro study plot around the Desert Lab buildings. He called the cards “a wonderful and scientifically important find.” You can see arms on a big cactus next to the main library building that froze and died in 2011, the new concrete posts of the garden exclosure, and the earliest weather station within that enclosure.

Photography was an important tool for the early scientists working at the Carnegie Desert Laboratory. The desert environment in 1903 was almost as unknown as the surface of the moon. For this reason, the reports written by the early ecologists working at the Laboratory here were largely descriptive. Sharon Kingsland, in her book The Evolution of American Ecology notes that, over time, records of landscape change would become an increasingly valuable resource.

Ecological work was not simply about doing experiments in the field. it involved creating a record of changes in the land, building a historical record from continuous observation that would, over time become an increasingly valuable source of information for future ecologists.

In a sense, every photograph taken on Tumamoc is part of the “repeat photography” archive. They all document the Tumamoc landscape, itself a laboratory, as it changes though time. I have taken thousands myself, and am aware that, even without intending to, they are part of a long tradition of repeat photography. Repeat photographers find the exact location and field of view of old photographs and take a new one. Comparing the two can tell a lot about vegetation change in the time interval.

I TRANSCRIBED the messages written on the back of the post cards as well as I could. They are the common small talk of human connections; only the tip of the iceberg is spoken on the limited space of a post card. More meanings may be implied, not unlike the fragments of conversation I hear among passing walkers on the Hill today. Of course, the understandings between people contained between the lines on post cards can not be known from these fragments. The stories are lost, only the cards remain.

Dear Florence, How are you. I’m afraid you are not well but surely hope my fears are fears, not realities.We are having fine weather here and am always bumming as usual and trying to have a good time. ( a second thought continued at top) Had a friend here [Cristina] for a while, which I?ll tell you about when I write, which will be soon. With love, Gladys

Stan sticks to the description of the landscape, verifying by direct observation that the theory about deserts being all sand is all wrong.

This gives as idea of the valley in which Tucson is situated. It show the desert which is covered with mesquite and sage brush & not all sand as people suppose. Stan