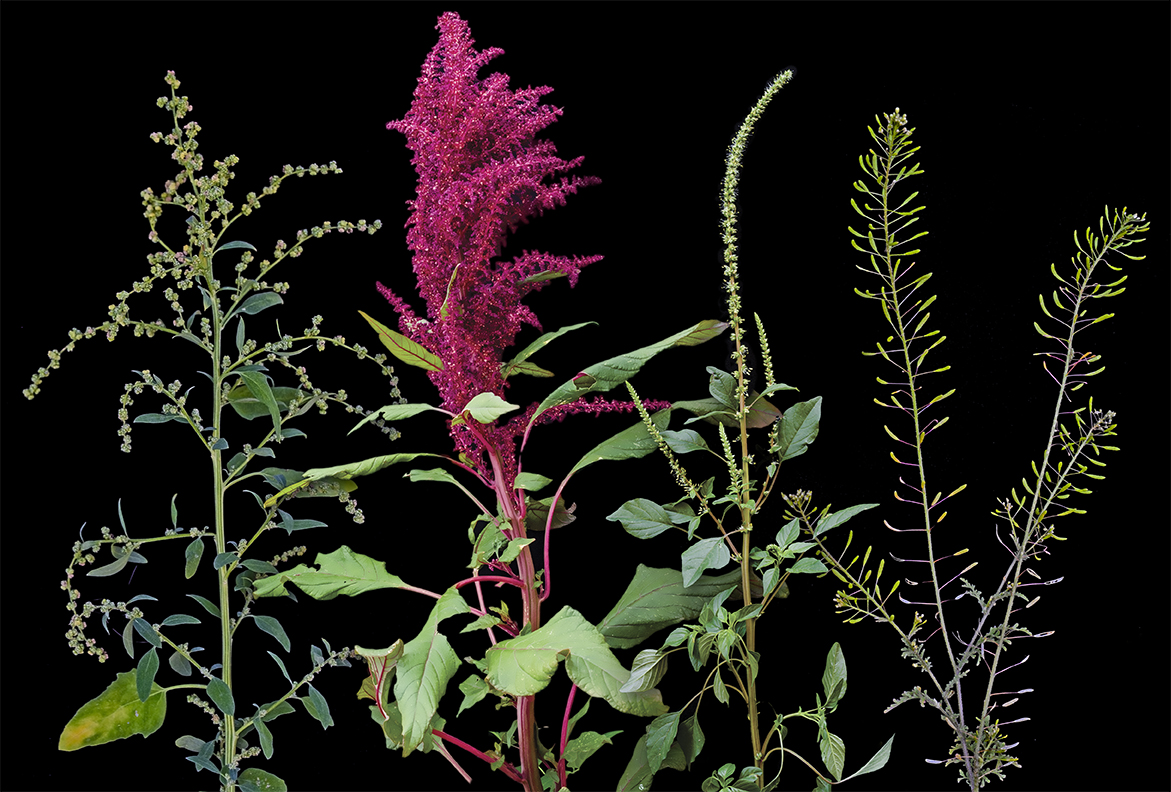 YOU MIGHT RECOGNIZE some of the weeds shown above as part of the monsoon jungle in your yard right now. If you haven’t hit them yet with your weed-whacker, you might want to get to know them better. They are highly nutritious, as well as good food for thought.

The September/October issue of Edible Baja Arizona features an article by me and my daughter, Anna Mirocha, called “What the Ancestors Ate.” It begins on Tumamoc on a summit tour with eminent archaeologists Paul and Suzy Fish. and it’s about more than local prehistoric food. While working on it, I spent six months reading archaeology papers and the complete adventures of Sherlock Holmes.

It started with this dialogue now an out-take rescued from my recycling bin. You won’t find it anywhere else.

PROFESSOR PESCATORRE was in his usual spot in the basement, past a long series of passages made by free-standing shelves holding boxes and trays of old worn-out objects of every kind. The man in the maze. I found him at his desk peering with fixed attention through a large binocular microscope. The light in the microscope lit up the twilight of the room.

He didn’t acknowledge my presence. Typical. Plastic bags of pot sherds and bowls of sand covered the table. After maybe five minutes spent in this way, he took a small object from a box and peered at it. I knew better than to interrupt him. He handed it to me.

“What do you make of this, Wojciechowski He now looked intently at me.

I didn’t spend long examining the small object in my hand. It was the size of a quarter, a nondescript brown color, quite weathered. I’d seen hundreds exactly like it. Yet, light flashed from tiny bits of reflective mica on its surface as I turned it over in my hand. “It’s plain ware. Hohokam, Tortolita phase, I suppose. Common as grass.”

“It’s a figure of speech.

“Indeed. In Minnesota, but you are in the Sonoran Desert now, he quipped. Still, these unassuming bits of ancient trash hold reasons for curiosity. Sometimes the most trivial things contain the key to questions we have not even thought to ask.”

You’ve found something interesting in that sherd collection

“Not a complex study, almost trivial, though it presents some novel and interesting features. Prehistorically, and even among traditional potters today, most plain ware, as you should know, was made from materials close at hand, usually within three kilometers from the site where they were used and later found by archaeologists no one without a wheelbarrow wants to carry clay and sand a long distance. One can argue that this kitchen ware was made and used locally. What is odd about this Tumamoc Hill collection is that it does not follow that pattern. Although some of the best clay in the valley could be had just at the base of the hill, near the Santa Cruz River, only about 20 percent of the sherds found on the hill were local. It appears from the data that people from all over the Tucson basin brought pottery with them when they visited the Tumamoc site. Why they did so is the question.”

“So people from all over the valley were bringing food up to that village on the hill summit I asked.

“The data only shows that the artifacts were made in a particular place, then later collected by archaeologists, broken, in another place. Similar studies of other settlements in the valley show that the sherds found were made from mostly or entirely local sand and temper.

“It’s improbable that prehistoric people carried their broken pottery bits to the top of a mountain just to scatter them there,” I offered.

“Quite so, he said. We can surmise that people brought the whole containers up the hill. The facts are suggestive, but inconclusive of any one explanation. Ultimately we can’t know the past, except through a few small fragments of things broken, lost, or thrown out. And then we are prone to interpret it through our own experience.”

I was intrigued with the past, so unknowable, yet those ancient scenes were once a present moment which someone experienced directly. “People had to be carrying something important in those pots up that steep, rocky trail, I said. There was nothing to eat or drink up there on that mountain. What was in those pots, I wonder Food and drink, most likely.

You young people are quick to make assumptions. You think they were partying up there, he smiled.

Or some sort of ritual items the historical O’odham still held ceremonies on hills. Events could last for days, and you had to feed the participants as well as the audience. Ruth Underhill in the 1930s observed that O’odham ceremonies were ultimately about food, and the rain needed for its production. Now I had started to lecture.

Yes, we know that pots were used for food and water storage, and cooking. He replied. And there could have been some kind of special activity happening on the hill. Tumamoc is quite a visible landmark from the places these pots came from. Yet, it’s a capital mistake to theorize before you have evidence.

But things tell stories. I replied defensively. Humans have been entangled with things since the first tool-makers. Eating is more than containers; it s fundamentally social. Bryan Hayden theorizes that competitive feasting was one force driving the evolution of agriculture. The hilltop has the hallmarks of a ritual sanctuary: a kiva-like structure, a possible plaza, a view of the solstices and equinoxes.

I see you’ve been doing your homework. He responded. But better call that a Community Structure a Kiva is strictly defined as part of the northern Pueblo tradition. We don t really know what people down here did in those ‘big houses.’ Anyways, those are all opinions, however well informed and they re un-provable by science. For every such idea, there are as many scholars arguing for its opposite. Maybe the whole Tucson valley fled to Tumamoc to escape the armies of the Phoenix rain-chiefs. There are those stone walls up there, you know.” He paused. “Yes, objects may have stories, but they can t tell them. The supposed events we re talking about happened over a thousand years ago, and nothing was written down. You might as well interview the sherds themselves.

All humans are wired the same. Everybody eats, and thinks; and food is a big topic for the imagination maybe second only to sex. I was speculating now. Just because they lived out in the god-forsaken desert and used stone tools, doesn t mean they only thought about survival. Maybe they had plenty to eat. A surplus based on Mexican food the squash, corn, then bean seeds that migrated up here from the south. Maybe they were working out cosmologies what is the world, what are humans, how should we act “

You might take a survey on their sex life, and their favorite colors as part of your research. Ask for their grandmothers recipe. His eyes glittered like the bits of mica in that piece of clay.

Their favorite colors were red and buff. I answered. And turquoise. They were tangled up in red on buff

“Do some writing, said the professor, smiling again. It might lead you to a thesis topic. At least it could be entertaining.

3 thoughts on “What the Ancestors Ate”