IT WAS A DARK AND STORMY AFTERNOON. A Tuesday. I was walking across the parking lot between buildings at the Desert Lab when I noticed a large, localized storm cloud moving in from the north. I watched for a while as a beautiful, translucent curtain of rain moved across the city below, slowly obscuring buildings and streets. Soon I could feel the moist wind and hear the approaching rain. 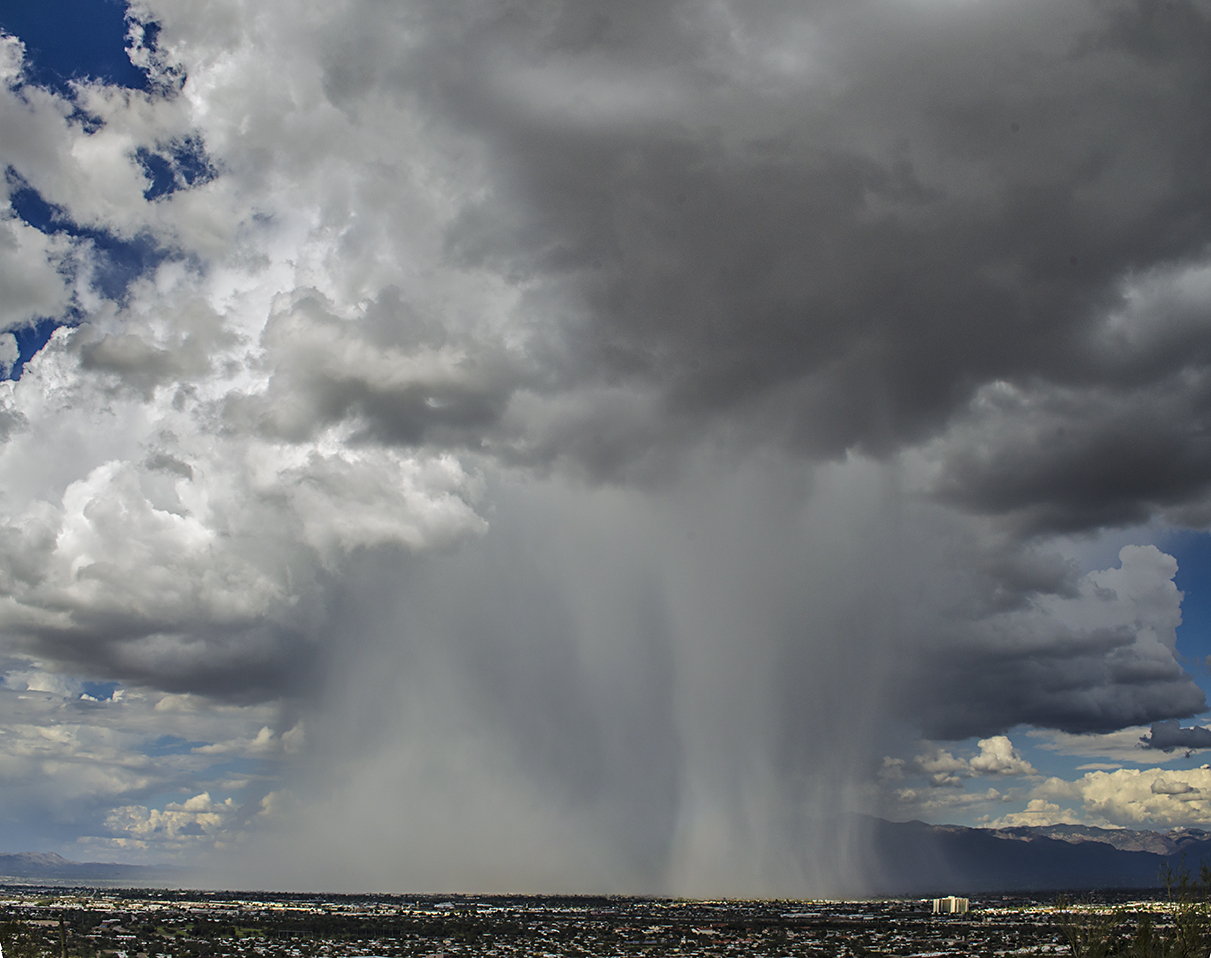 As the storm moved up the slope towards me, the odd thing was the sound much louder than normal rain drops hitting desert rocks. It was a roaring sound. I was inside when it hit, sounding like a boxcar full of golf balls dumped onto the roof. Hail driven by wind ripped into my arm as I walked out the door to look, and I quickly drew back indoors. A light fixture above the door broke and the desert ground was soon covered with bouncing hail stones about as big as they sounded.

A group of walkers took shelter under the wide eaves of a building. I found out later that people caught on the road below were terrorized and bloodied from the encounter. The mirror behind the Luminous Mother altar was cracked by a ball of ice from the sky. The wind-driven hail broke all the big windows on the north side of the main Desert Lab building. Since that building was finished in 1906, and I think it still had its original glass, this was the biggest hail storm in over a hundred years.

At first I thought it was the anger of the rain gods at walkers violating non-walking hours, but, there seemed to be no pattern or target to the wrath. The storm hit a wide area on the west side, not just Tumamoc, prompting a rush of insurance claims for dents and dings on cars and roofs including my white Subaru, parked in the lot on the hill. The wind was so strong that only the right side was dented in tiny random pock marks. I didn’t even notice them for a week at first I thought it must have been vandals, but what weapon did they use Slowly the truth dawned on me. Not wrath nor spite, but that hail storm. It caught even the weatherman by surprise.

Some time later, I met Professor Owen Davis in the parking lot and showed him the side of my car. “Yes,” he said, “that’s truly random, one of the three distribution patterns described by Rexford Daubenmire in his textbook on plant communities.”

I remembered enough of the name to find Daubenmire’s book in Google. There was a simple illustration defining three patterns found in nature: Uniform, random, and clumped. If plants have antagonistic relationships, or an individual depletes the local nutrients around it, they form a relatively uniform pattern. Plants become clumped when they are attracted to each other or to a common spot of especially tasty soil.

A truly random pattern happens when there are interactions are neutral, plants are indifferent to one another, meaning no interactions. Raw nature seems to be random.

What is randomness Are there things which have no cause, happen for no reason The mind naturally looks for a cause for any event even though sometimes that cause is wrong. We want to predict and control.

Early Desert Carnegie Laboratory scientists here on Tumamoc were obsessed by these questions. Why does the landscape look like it does Were plants distributed randomly, or did they interact with each other and the environment. How did plants even survive in the first place Those early ecologists set up the long term study plots on Tumamoc to answer these questions. And to prove Frederick Clements, lab director Forrest Shreve’s nemesis, wrong.

Clements was the most famous ecologist of the early 1900s. But he and the lesser-known Shreve clashed. Clements preached that plants were predictable. His theory of plant succession invoked the idea of a “super-organism.” in other words, individual species acted together like the organs that make up a whole organism. That organism was a landscape or vegetation association.

Some parts of succession theory remain, like the term “climax community,” but the Tumamoc long-term study plots refuted the super-organism concept. Over the last 110 years, each plant in these plots each plant seemed to go its own unpredictable way. They organized themselves partly at random. Sort of like weather.

I began to notice rain drops where they fell. I found the same patterns everywhere: random not too regular, not too clumped. Right out of the textbook.

The French mathematician Pierre-Simon Laplace didn’t like random. It wasn’t rational. To prove his point, he wrote a thought experiment in 1814 proposing that if the position and energy of every particle in the universe could be described exactly, then all the past and future could all be calculated. Everything was predetermined and could be predicted, given enough knowledge. Even where every rain drop would fall

The hard part about testing LaPlace’s theory is creating the imaginary intellect that had “enough knowledge” about every particle in the universe, later called “LaPlace’s Demon.” Maybe that demon is something like a super computer.

The National Center for Atmospheric Research has a supercomputer called Bluefire that takes up a whole room. Bluefire tries to do something like what LaPlace imagined store and analyze enough information to predict a small piece of the universe: the weather. Bluefire has 4,064 processors, each with a speed of 4.7gigahertz, 12 terabytes of RAM memory, and 150 terabytes of disk storage.

The equations for molecules in fluid systems like air and water have been understood since LaPlace’s time. That’s why he felt so confident in his determinism. But, it turns out that the atmosphere is so complex, so slippery, and fluid, so multi-dimensional, that even his demon would have to describe the universe in terms of probabilities. The computer is pretty good, but you’ll notice weather reports don’t try to make predictions more than a week in advance. Why is that

There’s this crazy little thing called chaos theory.The idea came from computer scientists trying to predict the weather in the 1960s. It’s also called the Butterfly Effect, from the title of a paper by Edward Lorenz called Does the flap of a butterfly s wings in Brazil set off a tornado in Texas Chaos is nonlinear, so it builds up quickly from small things into a large system that is infinitely complex. After a week, the weather is so complex it might as well be random. Tiny, almost unmeasurable events can determine whether it storms or is a sunny day. Or maybe they won’t. No one knows for sure. The weather report gives a percentage of a chance. Mortgage-backed securities work the same way.

Scientists studying chaos and randomness are reaching into the unknown, or maybe the unknowable. It’s the place that was once the realm of the supernatural, the unexplained. Weather what life depends on in the desert, was not always idle conversation as it is today. To indigenous people it’s religion.

To me chaos is creative; natural forms like clouds, mountains, water, sea shells, galaxies, etc can be described by chaos equations.

I PASSED SIGNS on auto body shops over the summer advertising hail damage repair, trying to cash in on that 100-year hail storm of June 30, 2015. I considered it, but decided not to repair the random dimples in the body of my beloved Subaru. I keep those tiny pock marks there to remind me of the perfection of the universe.

It’s the mark of the rain gods.

4 thoughts on “On Randomness”