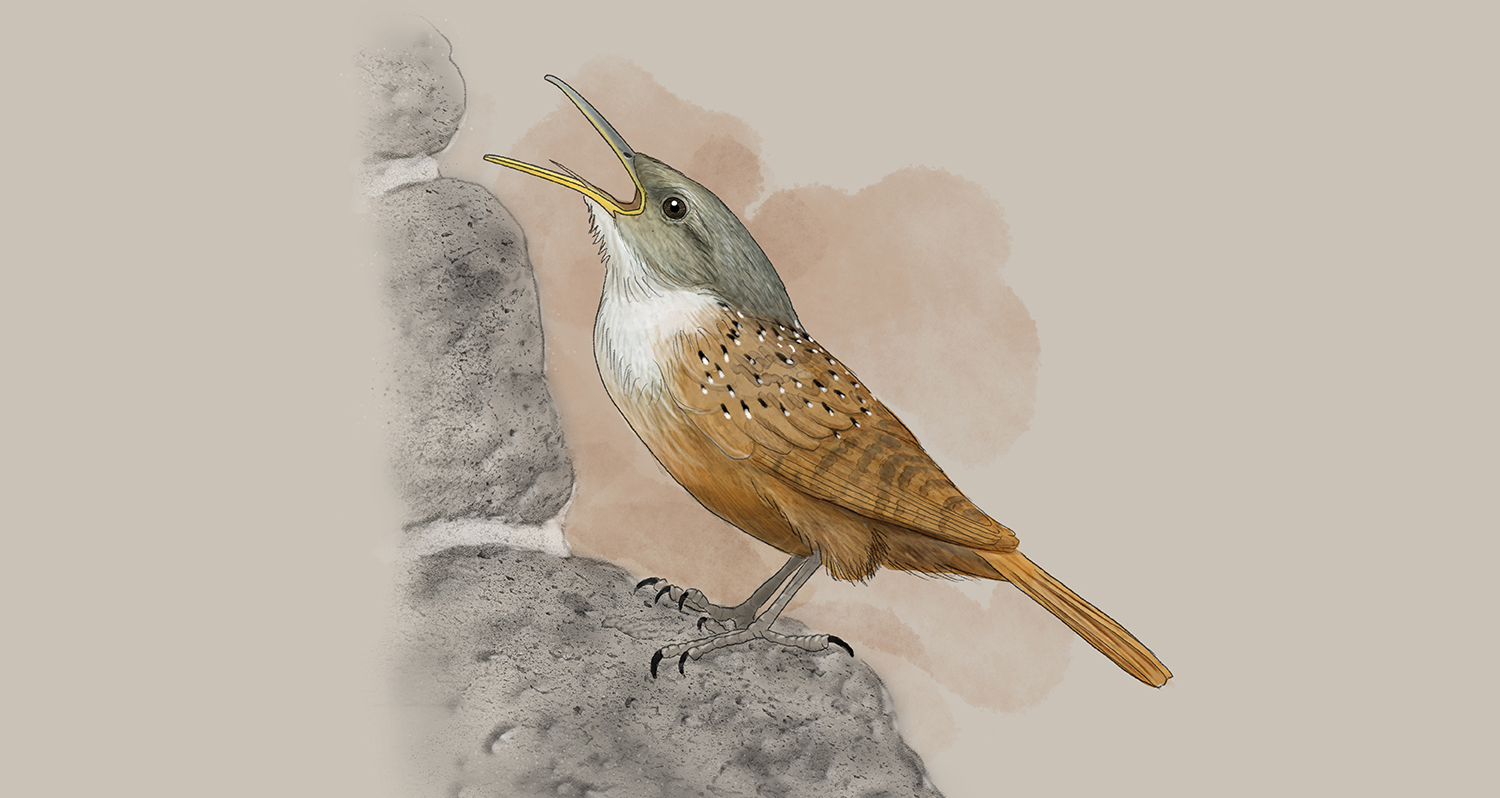 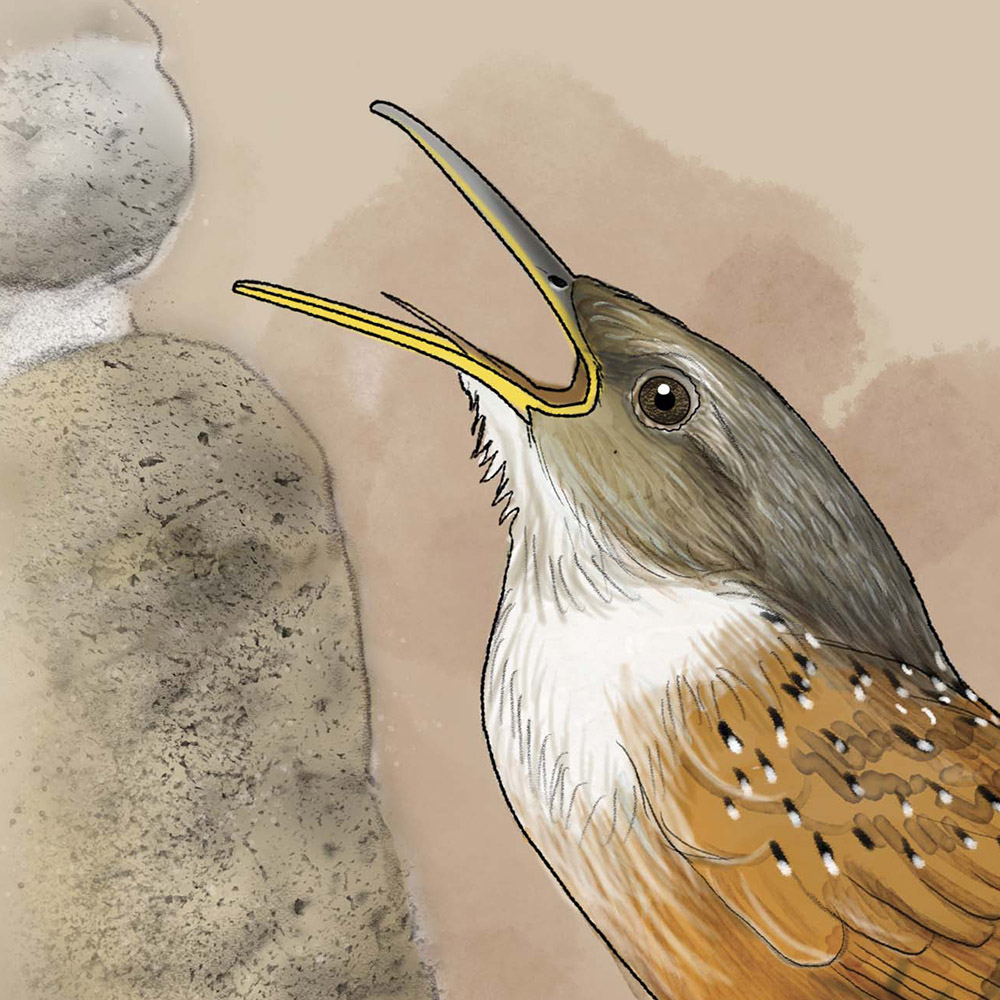 I HAVE TO ADMIT that I drew this desert Canyon wren while I was in Minnesota, using photographs and Google searches. It’s the drawing that went onto the Tumamoc roadside signs. I was under deadline pressure so my vacation to visit family got tangled up with work.

Canyon wrens don’t live up north, but that didn’t matter. I wasn’t exactly sure what one looked like anyways–I’m not a birder. During planning meetings for the Tumamoc signs, I advocated for the Cactus wren, a cousin of the Canyon wren, but louder and surely were more common and visible to walkers along the road. No one sees skittish little brown birds like the Canyon wren, they all look alike to normal people. So I thought.

A few months after drawing one, I began to see them everywhere–Canyon wrens, with their bright white throats and reddish brown backs, looking just like my painting. They became common. It’s like they were coming out of hiding, or else holding a Canyon wren conference, arriving from all over Western North America, because I now could identify them, coming to look at me. Does this ever happen to birders

I had long recognized their throaty call, cascading down a warbly musical scale, a Shoenberg 12-tone etude. But now they were making another call, sounding like short, soft blast of a police whistle. Yes, a soft blast. I heard them outside my window. They love the stone walls of the Desert Lab buildings–I guess the walls are like canyons. Wrens began to appear on the rock around my window, looking in at me.

Once as I sat at my computer, I saw a flutter in the hall. Then heard the soft police whistle. Now they were coming inside. I don’t know how it got into the building, but I got a towel and eventually captured the poor thing. I was released it outside, startled by the beautiful, delicate pattern of spots on it’s back. I touched it, soft and elusive.

Another time I was working near a screen door that didn’t quite close. A tiny Canyon wren walked in, fearless, looking me up and down. It didn’t take long to check me out, then turned and walked out. As it disappeared, I heard one of those beautiful descending 12-tone scales just outside the door. What was that about 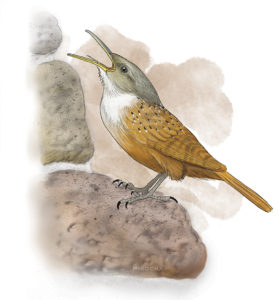 How many things that we pass every day are invisible or inaudible to us because we are so preoccupied with our own internal dialogues and trains of thought. We live in our thoughts and don’t see much beyond the tip of our noses. Birdwatching–it’s like peering into an unknown world. One day we notice something, which leads to seeing other details, until a whole landscape lies before us as if a curtain has been lifted. Like, we once were blind and now we see: the Land of Oz, or the Sonoran Desert!

Aaron Flesch, an ecologist working in the next building, told me Canyon wrens had more than two calls, and they came inside the buildings because they were used to exploring crevasses piles of rock. Wrens come down the chimney in the main building from time to time and he often had to catch and release them, or they’d die in there.

A new acoustic dimension to my world began to take shape once I started to listen to the wrens, invisible, overlaying the landscape. It was complex. There were other bird sounds, constantly on, wherever I went. Something was definitely up. Aaron told me this was a question on the of cutting edge of science, for instance, Erick Greene’s research on bird calls. Greene analyzed subtle patterns in bird sounds on a computer and discovered a sort of social network that stretches across a landscape, no one knew how far; full of information, a “language of the forest.” It was there, not a secret, concealed right out in the open. Greene found that birds understood calls from other species, including mammals like squirrels and chipmunks, who repeated a bird’s message, added some spin of their own, and passed it on. When a hawk flies overhead, everybody knows about it long before he’s even close. They are all connected.

How much do these birds know, and how much do they say Poets, like scientists, spend time listening to birds. Pablo Neruda listened in and overheard a lot of the buzz.

Impossible.
You can’t touch them.
You can hear them
like a heavenly rustle or movement.
They converse with precision.
They repeat their observations.
They brag of how much they do.
They comment on everything that exists.
They learn certain sciences
like hydrography;
and by a sure science
they know where there are harvests
of grain.

–Pablo Neruda, from “Ode to Bird Watching”
(translated from the Spanish by Jodey Bateman)

If you draw them, they will come.