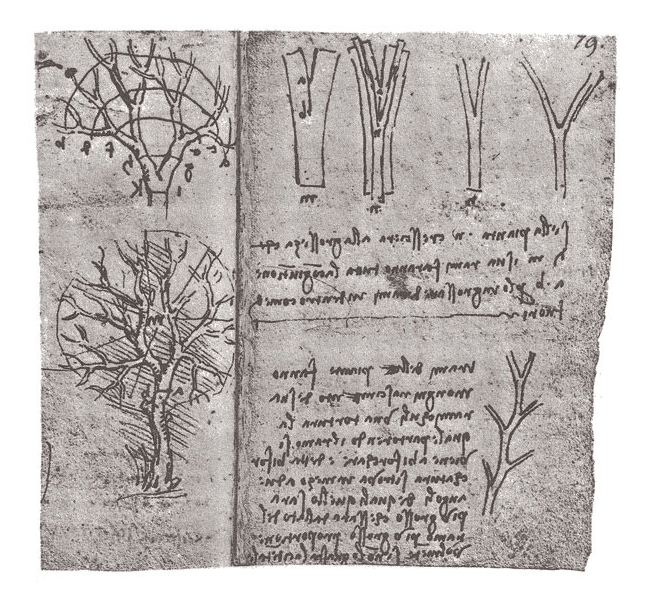 This discussion is an excerpt from the workshop hosted by The Desert Lab on February 13, 2021: “Fractals and Forests” part of the series Seeing Math in Nature.

“…and what’s great about this Tumamoc series is this intersection between art and science, because I can point to several examples where actually it was the artists leading the way for the scientists and mathematicians who came in later and filled in our deeper understanding.”

Suddenly, my ears stood straight up as I listened to ecologist Brian Enquist introduce his research on fractal geometry in Amazon forests. An artist inspiring scientists? Who did he mean?

We were leading an art/science workshop on fractal patterns in nature. The workshop began, as usual, with a lecture by a scientist, then a drawing session with an artist on the same topic. I played the role of “artist.”

Brian meant Leonardo da Vinci, of course. This was not the first time I’ve heard Leonardo’s name come up in a science lecture. Each time it does, I think, “This is the holy grail of art/science” How did Leonardo continue to influence scientists 500 years after his lifetime? He didn’t even have a formal education. Yet maybe that was his key to thinking outside the box–he hadn’t been taught that there was a box. He used only his mind and his powers of observation.

Brian went on to explain Leonardo’s insight, gained through pure observation: in order to accurately draw a tree, one needed to understand that the cross-section of two “daughter branches” equaled the cross-section area of the “mother branch.” After all, there is a continuous flow of water and nutrients upwards and downwards through the branches. As in a plumbing network, there can’t be a sudden constriction or expansion of the pipes–either one would slow the flow or lose pressure. Branches get narrower as they go upward. Any artist figures this out–you can’t draw a wider branch above a narrow one or it looks wrong. Leonardo just went further than this: he quantified it.

Leonardo didn’t know about “fractals” because the word was made up by mathematician Benoit Mandelbrot for his pivotal book The Fractal Geometry of Nature in 1982. In this book, Mandelbrot showed how great visual complexity can be created in nature using a few simple rules.

Brian went on to explain that, seeing trees as fractals allowed scientists to use Leonardo’s rule to calculate how much carbon dioxide a tree takes from the atmosphere. Since plants are made of carbon, this will tell us how fast a tree will grow. Since all trees follow the same rules, he can calculate the nutrient inputs and outputs of an entire forest in the Amazon Basin. In fact the whole forest has a fractal growth pattern of its own.

As usual, I realized I couldn’t understand this without drawing it. After Brian finished his talk I demonstrated a simple way to understand the fractal branching of trees by drawing it. I had prepared by digging into the math in my sketchbook. To make me look smart, I got some coaching by my daughter, Claire, who is a graduate student in mathematics at UC Berkeley.

Leonardo’s rule can be expressed in this formula:

with D as the diameter of the mother branch and d as that of the two daughter branches.

This equation simplifies to:

So if D is set to one for simplicity:

Interesting. The square root of 2 is an irrational number often found in natural growth patterns. It’s easy to see why–Areas are expressed in squares. Pythagoras stated that the area of a circle (the cross-section) is π ​r​2. The radius is half of the diameter, of course. For my drawing, I’ll just use the diameter.

There are three factors to consider in drawing tree growth. The diameter of the daughter branches, as just mentioned, the length of each branch before it branches again, and the angle of the diverging the daughter branches from the mother branch. Each tree species has a characteristic branching angle that gives it an identifiable look. After that, the law of tree growth is fairly simple: grow a certain distance, then branch. The branching is to increase its surface area to grow the leaves which life depends on. Finally, the tree must consider strength if it is to survive strong winds and storms.

I went out with a protractor to measure the branching angles of a few of the Palo verde trees growing around the Desert Lab. It was not exactly statistically significant, and there was variation, but the average angle was near 60 degrees. It is what gives the Palo Verde its distinctive flavor.

So I had my branching angle: 60˚, and the two branch diameters: 0.7 x the diameter of the mother branch. I needed the third parameter: how long a branch should grow before branching again. I chose 1/√ 2 (or 0.7). It’s a ratio that comes up a lot in nature. A factor like that makes each branch successively shorter than the parent branch by a regular ratio. I’ll add here that one reason the branches must get shorter as they grow outward is practical engineering–as branches get thinner, they have to be shorter to maintain structural integrity against the wind.

I made a cardboard Fractal Tree Calculator based on these numbers. It has a template for the 60˚ angle, and a scale of lengths shortened by the 0.7 multiplier. You can print it out and try it yourself. The point is not to draw a beautiful artistic tree, but to understand tree growth by using hand and brain together. Here is one of my efforts. All I can say is draw one yourself and you might reach something like a eureka moment.

The following video compresses a 20-minute drawing demo to 1 minute. It’s an exercise in using math to draw a tree and understand fractal growth patterns. More importantly, there is a secret knowledge gained here: creativity comes from the visual/spatial side of the brain. Drawing with this kind of expanded awareness creates new connections between your logical and spatial mind. Like mental gymnastics, drawing over time will increase your visual intelligence (VQ) and open up new creative pathways in your brain.

All told, it’s not a bad way to spend a Saturday morning. And I will l never look at a tree in the same way again.

The 2-hour UA Tumamoc workshop “Fractals and Forests” was held online on February 13, 2021. You can still purchase a recording-access ticket for this event and others in the Desert Lab online workshops series.