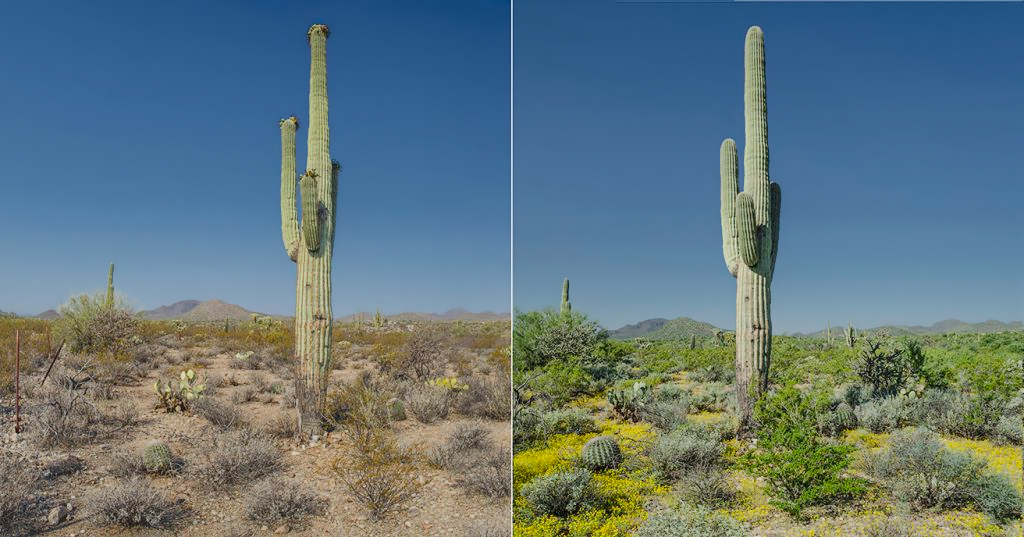 IMAGINE A MAN TRAVELING ALONE through the vast, lonely terrain of Aridamerica. He could be anywhere from Southern Arizona, into the rugged Sierra Madre, west into Baja California, east into Chihuahua, and south to Guadalajara. A man’s thoughts are his own—yet, whether it was yesterday or thousands of years ago, biology doesn’t change much. We might easily guess what he was thinking about; maybe every seven seconds or so...

That’s right: how many inches of water are left in his canteen?

Water. We know it keeps us alive. But in Aridamerica it means more than that—when it’s there, all things thrive, grow, expand, turn out green. It’s the essence of desire. Love, happiness, riches. And all good things fall short if you don’t have this one thing.

What if it just fell from the sky?

It often does, but it’s hard to predict. Even with current super-computers, you will notice that weathermen don’t try to predict much more than a week out.

A common simplification about deserts is that it’s a land of little rain. That’s only partially true, but like all partial truths, it leads you into error. The reality is more nuanced–contrast, indeterminacy, and impermanence define a desert. One never knows with certainty what will happen after next week. Sometimes there is too much water, and you don’t know when it will come again.

At the Desert Lab, measuring rainfall is a minor obsession among desert scientists, especially the old rain gauge standing out between the buildings. Maybe this feeling is a remnant of those ancient Aridamerica survival instincts that attend to one’s canteen. Even though there are modern digital weather stations on different parts of the Hill, they only generate a bunch of numbers. There is something satisfying about the manual rain gauge—like measuring how many inches are left in your canteen. The weather staions are good, but there have been times the electronics didn’t look quite right and people wanted to compare the readouts to the manual measurements for a reality check.

Ray Turner, classic desert scientist, used to drive up from his home across town after a summer monsoon to check the old rain gauge and make sure someone recorded it. He had reason to wonder—for a few years in the 2010s the Hill was somewhat of a ghost town and measuring the rain was not in anyone’s job description. The records were kept on sheets of grid paper in a filling cabinet that went back about 100 years. Ray showed me how to read the special calibrated ruler for the gauge. The water was collected in a funnel that concentrated it in a ratio of 1:10 as it flowed into the collecting tube. At first I thought we had just recorded 10 inches! Ray patiently explained that those were tenths of an inch markers and I should record 1 inch.

It felt like a sacred initiation to be trusted with keeping the rain records. I used to drink the water after logging the data. Clean and tasteless as air, with hint of brass from the old collecting tube. I remember one day I was measuring the gauge in the main office and Ray, always precise, told me, “get it back out there, it’s still raining!” True, it had started drizzling again–he didn’t want to miss a drop. Those inches of water were precious data to Ray. I can still see his huge smile when he saw there was rain to record.

I got out of my car at the water pumping station off Anklam Road and collected my camera equipment by the gate into the wild west end of the Tumamoc research preserve. At 7am it was already 100˚F. I thought about how much water was in my water bottle—maybe I should take two bottles. But water is heavy and, although the west side of the hill is a wild lonely landscape, it’s only about a square mile in area. I’d pay for this mistake later.

I was here with GPS coordinates to find and photograph the Spalding plots. These plots, the oldest vegetation study plots in the world, were mapped every ten years. They were coming due next year in 2022. I had some ideas about adding art to that data archive, but nothing had really clicked in my mind. I didn’t know what I was doing here. I thought maybe by clicking the shutter on my camera I could make something happen in my mind. When in doubt, just take some pictures and lay them all out later.

2020 was a hard year for what keeps us alive. In the early weeks of that year we whitnessed the slow arrival of a new plague that seemed to infect the whole world. For weeks that June we watched the mountains burn for want of rain. Secret places within our minds began to burn or dry up, testing our own resilience; waiting for rain that didn’t fall. Even some veteran desert plants like the brittlebush, Encelia farinosa, died in the study plots. Then, adding injury to insult, almost no monsoon in July and August 2020 in Tucson: a pitiful 1.62 inches.

The first plot I came to was plot 4. Dry as an old bone, but juicy somewhere down inside and hanging onto life. These plants were used to this. It has happened before. Yes, some of the hardiest shrubs had left this world for good.

If we look at the Tumamoc rain gauge data we see 2020 is the driest year since 1924, before any of these current plants were born. But, they have a genetic memory and built-in resilience, don’t they?

Another thing to note from this data is how variable the rainfall is. Wet, normal, and dry years appear to alternate randomly, showing contrast, indeterminacy, and impermanence. Since the chart below shows only monsoon rainfall, we can see that 2020 is still the driest monsoon on record.

One more thing to consider: rainfall depends where you are. Rainfall in the desert is very spotty. The records on Tumamoc Hill are often slightly different from the rain logs of a rain gauge in the nearby neighborhood, a half mile away. Rain gauges even record differing amounts on different parts of the Hill.  Desert plants know all about this indeterminacy.

I’m back at Spalding plot 4 and a lot has happened. It’s a green and joyful place after a month of record monsoon rains. It hums, flutters, and buzzes with life. The ground is covered with a yellow carpet of Dysodia flowers, which fills the air with a sweet minty scent mixed with the smell of soil, hints of turpentine, and any number of essential leafy oils. At least three kinds of yellow sulphur butterflies flutter about in thin shimmering clouds. Cloudless sulphurs, Dogface sulphurs, an occaisional Queen butterfly. There were more shades of green than an artist could mix on a palette. Even the tough old creosote bushes have come on large, their leaves almost huge and a most intense creosote green.

The monsoon of 2021 was 12.79 inches of water compared to the average of 5.55 inches calculated by the Weather Service.

The Spalding plots had captured this 2-month change and I had accidentally recorded it in my images. Here is a combination of June and August for Spalding plot 4.

Now I began to generate a string of ideas for adding new layers to the archive of the historic Spalding plots. In addition to the numbers scientists collect, there is a human sensual experience of these marked off places, each one slightly different. My ideas began from the human tendency to make pictures to try to understand something new. A lot happens in between the ten-year check-ups that scientists give the plots. There is plenty to work with. There is beautiful data to be recorded in the in-between time.

Next time I will carry the extra weight of a second water bottle. The long walk in June searching for Spalding plots left me feeling wrung out for the rest of the day. It was good to sit at a computer, drink lots of water, and process images.