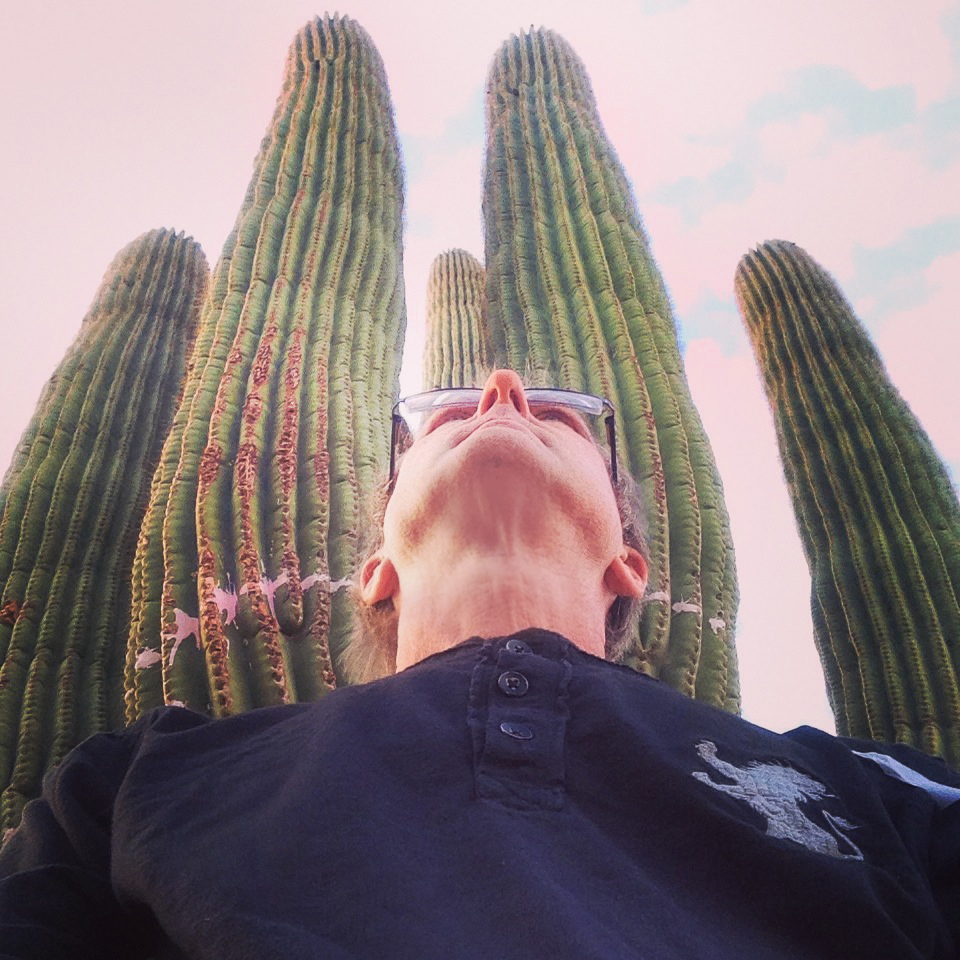 SAGUAROS are just like anything else. If you want to get to know one, you have to be willing to spend the time. Not Facebook time, but real time, physical presence?that’s all saguaros can relate to. It’s worth the effort. They are quiet and reserved by nature, like most plants. And like any other friend, saguaros will only tell their secrets when they know you are listening. Time is the true currency of friendship.

Last Saturday, I was one of about a dozen participants in artist and choreographer Kimi Eisele’s “How to Duet with a Saguaro” project. It’s not a “How To.” It’s a question. Also an official artist’s research project, filed and approved by Tumamoc administration. Saturday was a test run of the idea, to see if it could be done.

Of course we already know that humans can stand by saguaros for an hour, but should they? Will a saguaro respond? They live in another kingdom?plants, while we mammals are very distant relatives on Darwin’s tree of life. Yet we share around 25% of the same DNA. also saguaros can live 150-200 years. Considering their different sense of time, which exceed that of humans, is an hour enough?

One of my research questions is: what, if anything happens in a saguaro’s life in the space of one hour?

We don’t know, but an hour seems pretty long to us, so we started with that. Saguaros just seem to invite this sort of interaction. After all, they stand in one place for one or two centuries. They have arms, there are some characteristics that we can relate to. We stand upright too.

Project participants walked together up from the gate and people peeled off when they felt attracted to an individual saguaro. I found myself stopping at one farthest up the hill from everyone else, a couple of switchbacks above the Desert Lab. It’s a cactus that I’m well acquainted with, one I have been wanting to get to know better.

My hour with the saguaro was 5:30-6:30 pm and the sunset was one of the most beautiful I’ve ever seen. Or maybe I just don’t stand for an hour often enough to see more sunsets. There was a hint of haze that gave the Catalina Mountains the flat distant look of a stage background painting. The breeze held a hint of moisture, yet there were no rain clouds in sight. I admit that I was distracted for a while, watching the sky. Yet, I stood by my prickly companion. I resisted taking an iconic photo with a saguaro silhouette in front of the sunset.

My chosen saguaro is in the North Saguaro Study Plot so it has a number and gets a check-up by Tumamoc scientists ever 10 years or so. Someone had stolen the aluminum stake with the number. My saguaro stands right on the shoulder of the road so you can hug it without going out of bounds. (We were instructed, like everyone else, to remain within the roadside boundaries.)

Last year someone threw pink paint on this cactus. Looking closer, I could see more human damage: a small stone embedded in the skin, a stick inserted. The stone must have been propelled by something like a sling shot. The stick could have been slowly drilled in by hand. In general most of the cactus base that was within human reach was weathered and brown, full of holes. I know some of this was freeze burn, age, and dermatological signs of wisdom. I stepped around to the other side facing away from the road. It was green and in much better shape. Clearly the interactions from the road are more intense than those coming from the open desert.

Most of the spines had been worn away. I rested my hand on the smooth saguaro skin. Writers use terms like “sentinel” when being poetic about saguaros, but I believe their sense is primarily touch. Their roots stretch out for quite a distance around the trunk, they feel the wind and move slightly in response to it. I was standing in the lee of the trunk, in a pocket of quiet sheltered from the wind. I picked up a stone. The saguaro skin was warmer than the stone, but cooler than my hand.

Ancient Chinese standing meditations used in Qigong and Tai chi might be useful for projects like this.? You relax your body, root yourself, imagine you are breathing up chi? through your feet through your body, then breathing your tensions down into the ground again. The weight is equal on both feet, feeling like one foot. The mind is to be absolutely empty and the body perfectly still. It’s the first posture at the beginning of a Tai chi form. Students practice for years before getting Wu ji right, and everything developed later in the form depends on that.

Some of these chi-generating postures even have one hold the arms in several positions, completely relaxed, for long periods of time. Some are saguaro-like. One text suggested 45 minutes as a good time span. So an hour seemed like it would cover this.

That feeling of chi, or thought-energy, for lack of a better word, coming up through the soles of our feet (The Kidney 1 point, bubbling spring, in acupunture) seems to give us some commonality with plants. Chi can be described as a universal life energy that runs through both living things and through the landscape. We get it though our Kidney 1 point. It’s not a western concept, so there is no way to prove any of this, or need to in Chinese medicine. Just go with it.

I asked my Tai chi teacher about Wu ji. He explained that,in Chinese, Wu chi means something like “boundless infinity” or “ultimate nothingness”, or “emptiness containing everything.” It’s unity before yin and yang, a resting pose, ready for anything. Hands are over your Dan tien, or center, there is no movement, neither up, down, to the right, or to the left.

The practice is said to provide many healing qualities, both for the body, mind, and emotions. He said that saguaros hold a lot of chi.

After some thought, I realize that saguaros are standing in Wu ji for their whole lives. Weighing tons because of all the water they store, and having a wide, but shallow root system, and only a light-weight wooden rib structure, saguaros must remain perfectly balanced on their center of gravity as they grow. Arms come out radially, seeming to confirm this sense of balance. If a large cactus like that is not perfectly centered, a wind will easily blow it over.

Standing by my saguaro I closed my eyes. I’m sure I could feel that chi from a few inches away. But I won’t try to prove it.

This inner sense would have been enough to practice, yet I found myself also listening to the walkers going past on the road. Some people stopped to take a (usually futile) photograph of the sunset. I think that was because they thought I was standing there watching it too.

If they could see and hear, a saguaro by the Tumamoc road would understand the essence of Homo sapiens: being bipedal and possessing language. Humans are always moving and constantly chattering, walkers and talkers. I noted several fragments of conversations that passed me by. It was like a randomly created collage where different people take up the conversation without seeing the previous comment. Or an automatic poem. Always happening on Tumamoc, different depending on where you stand and listen.

…I’ve never seen a snake, but I saw a giant tarantula once. That was kind of cool…

…Bay leaf is really important, you got to have a bay leaf in there…
(On their way back down, the same two women were still talking about food.)

…I’ll just leave her alone then. If she calls me, if she texts me, well…

(a radio) …If you weren’t eligible in the past, well the guidelines are now…

There was so much going on. An hour is not enough time to pay the attention this spot deserves.

Kimi and I asked Owen Davis, a palynologist working on Tumamoc who is very interested in time, what could happen within one hour of a saguaro’s life. If anything. 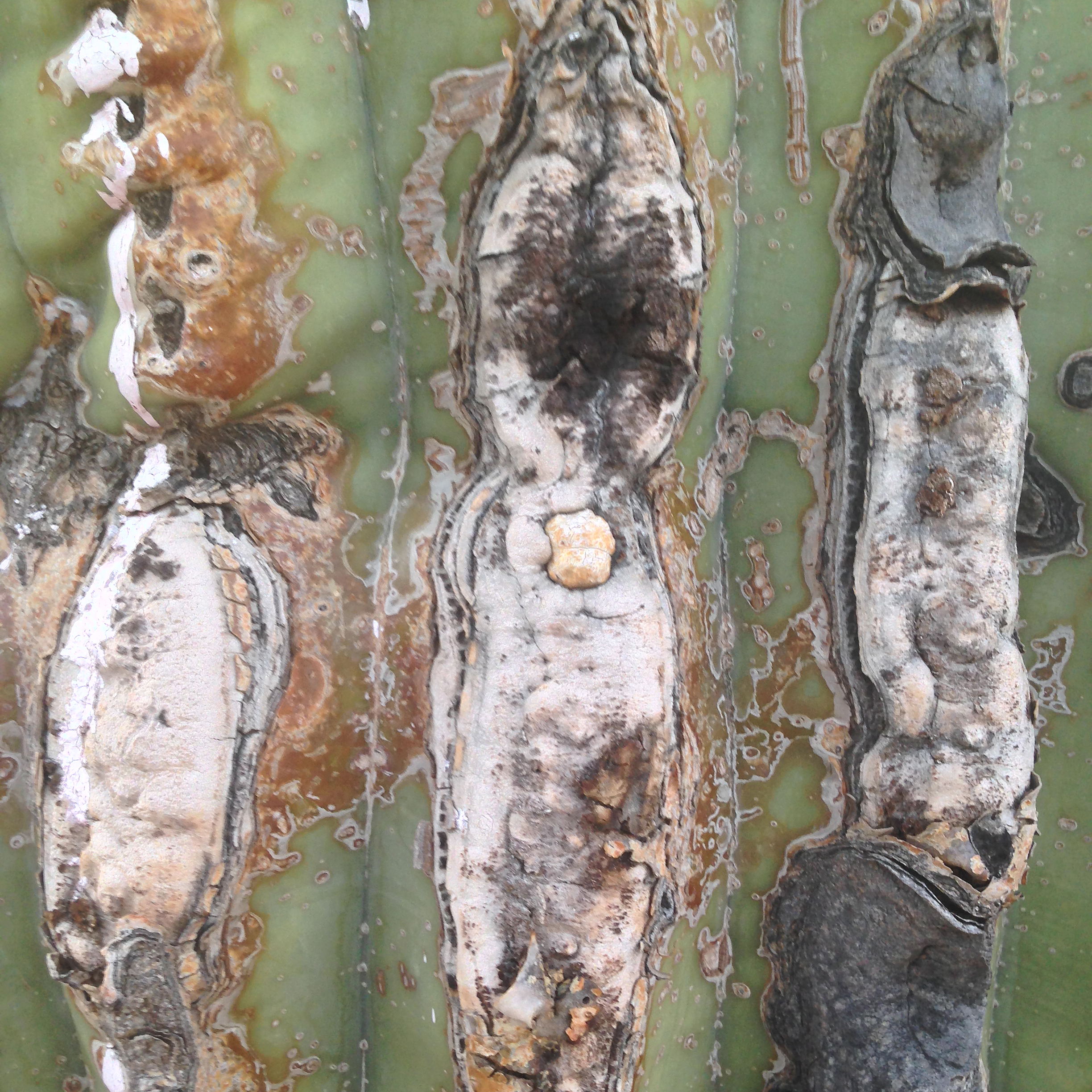 3 thoughts on “I Stand with Saguaros”