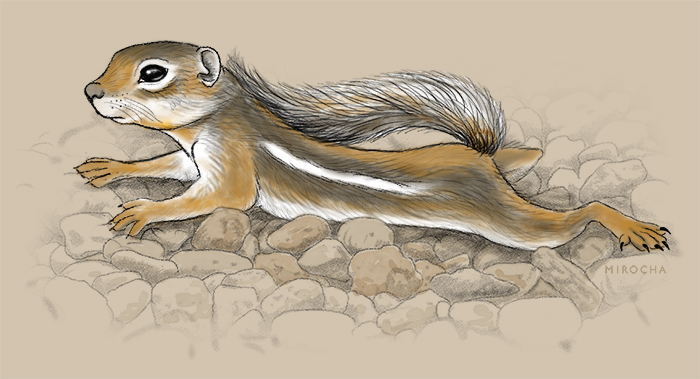 Or: What I really did on My Summer Vacation.

This summer I have been working on a series of educational and interpretive signs to be placed along the Tumamoc road. Anyone who has walked up the Hill in the past week has seen the 15 blank metal sign posts spaced along the route at stopping places where people rest. Well, there’s more! There will soon be art and texts in those frames.

It’s been a long process that started two years ago when the Tumamoc staff wrote a successful proposal to The Arizona Game and Fish Heritage Fund to produce some educational signs along the Tumamoc Road. The more people know about the landscape, the more they would begin to see, to engage with the place and respect it. The Tumamoc landscape is always giving something that humans can use and benefit from, we just have to be aware in order to receive it. It doesn’t have to be science they learn. For example, it may be simply seeing beauty. Beauty is one of the most useful things I can think of. The signs and the science just point the way: just look out there past the road. What do you see?

Last Winter and Spring, as? a first step to developing the subjects for the signs, we designed a survey intended to gather information on how visitors perceived the Hill, why they came, what they knew, and had already seen and appreciated in the environment. We went out to the road and interviewed random walkers at different times of the day.

From that basis, the signs evolved over the past year, making several twists and turns along the way to become what they are today. The main news is that the first eight interpretive signs for the Tumamoc Road are at the printer and will be installed soon.

I wanted the illustrations to have a hand-drawn, sketchbook look, to encourage people to look around them with the kind of intimate observation an artist, sitting in that spot might have. We originally considered photography and super-realistic illustration, but I decided against that. There have been studies by the National Park Service indicating that many visitors are so inundated with photographic and highly technical imagery with super-saturated colors, that they don’t attract anymore. We are so flooded with images that we don’t pay attention anymore. Or not for long; we walk on by. I decided to go back to fundamentals. Drawing is closest to seeing. It adds an emotional tone and encourages people to do the same kind of looking, not at the art, but beyond it. Look at the desert please.

One might also wonder why all the signs feature animals. After all, the Carnegie Desert Botanical Laboratory was famous for its work on desert plants. 111 years later we are still building on those researchers’ intricate and broad observations. The science of ecology grew up among these botanists who became interested in plant associations, interactions, and how a landscape is put together as a whole. That includes animals of course, because everything is connected. But to explain the bias towards animals, consider the source of funding?part of the contract required an animal on each sign.

I think plants are under-appreciated. There is even a syndrome called “plant blindness.” Research has shown that many people don’t see plants! The green shapes and textures are considered part of the background and are tuned out. Yet people always see animals. I guess we are all animals and programmed to see each other. Be that as it may, animals are what people see first so they are a perfect window and opening for city-dwellers walking through a wild desert landscape. Once you see something, you tend to notice other things, and then more and more. On top of that, Professor Michael Rosenzweig, Tumamoc director is, among other things, a mammologist.? Mike wrote the text.

Initially, I worried when the texts came in at twice the word count I had designed into the sign layout. I argued that a signs has about 10-15 seconds of people’s attention, if you were lucky. After all they are passing by, going somewhere else, and anyways they did not come here to be educated. But in discussions I had to agree that most walkers come to Tumamoc regularly and would eventually read all that text. They might eventually be bored with the same old stuff. That’s why the metal frames are permanent, but the sign inserts are designed to be temporary and changeable: some will change with the seasons, others with visitor feedback, or a new idea we have. The system is flexible, we can always design new replacements as desired and needed.

The result is a series of little gems, each explaining one idea, one simple concept in ecology. They are stories which are taking place out there beyond the Tumamoc Road. It’s unique and you won’t find anything like it anywhere else. That’s Tumamoc?it does not follow the crowd. It goes it’s own twisting and turning way. That’s how evolutionary ecology works. 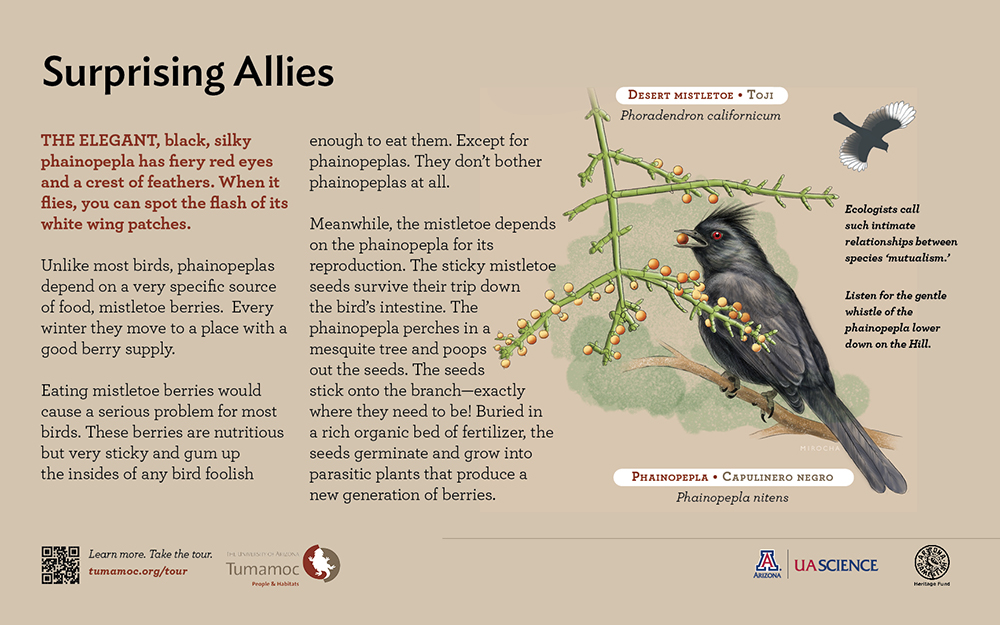 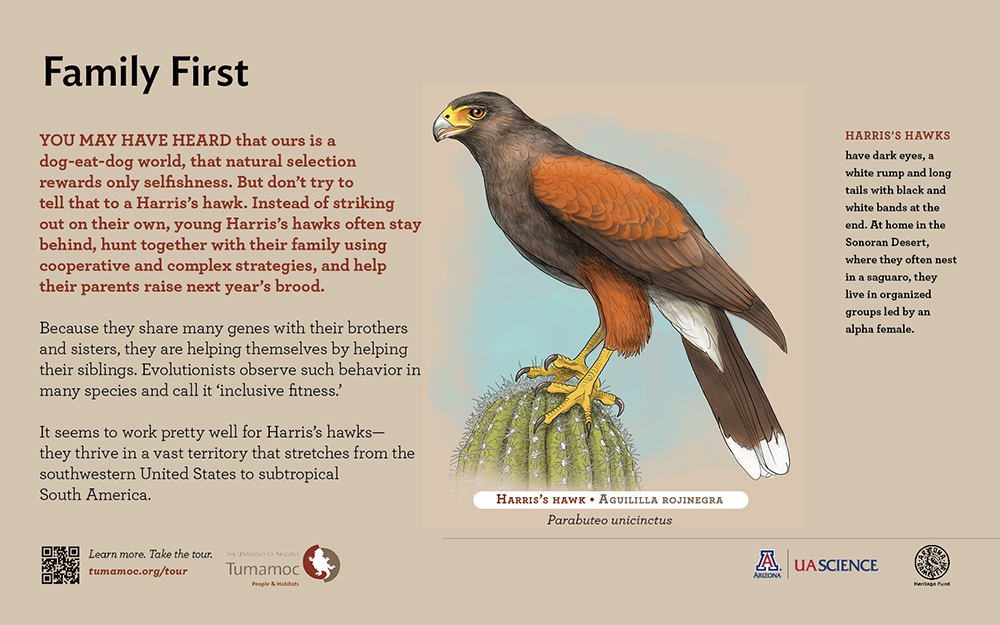 2 thoughts on “Signs of Things to Come”